Victoria and James arrived about 8.30pm last night, Muffin was overjoyed to see them though I had been winding him up as we watched them getting closer on WhatsApp!  He recognised the car as it came in the gate, and they stopped and let him into the car to say hello.

We were up about 7.30am and ready to go by 8.30am.  We had a boat moored on the outside of us and they were ready to go too and, as an added bonus, they were going our way.  James came with us on the Thames a couple of years ago and his experience of a lock was holding a rope as he was magically raised or lowered.  He had a quick lesson on lock operation and was away.

There are almost 5 miles between Cape Bottom Lock and Radford Bottom Lock, so my first job was to be bacon sandwich chef.  For some reason it seemed easier on the boat to make sandwiches for four than making them at home.  While we were eating our sandwiches Victoria, James and I did some wedding planning, the wedding is only 81 days away.  There still seems so much to do.

We pulled over just before Welsh Road Lock and moored up as Victoria’s friend, Vanessa, was coming for a quick visit with her gorgeous 11 month old daughter, Tilly.  She kept pointing to Muffin and saying cat – poor Muffin.

It just started to rain as Vanessa left but by the time we got to Welsh Road Lock it was pouring.  We did five locks in the rain and then it stopped, and the sun came out!  We moored up just before the Two Boats Inn.  I had planned to cook but in the end we decided to have a meal at the pub.  It was a good meal, but the social distancing and masks were noted by their absence.  We were the only people who wore masks in the pub and that included the staff. 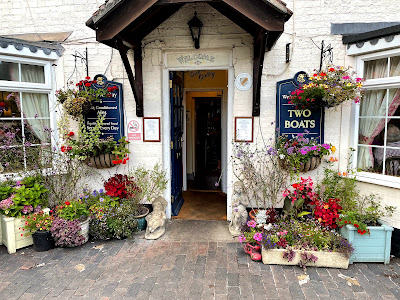 I mentioned, or ranted, the other day about narrowboat Smoke.  I’ve had two more comments since I published the post.

We moored below Shrewley tunnel on pins. We felt the boat rocking a saw a boat coming towards us at ramming speed. Hubby popped up and asked them to slow down a bit. Surly teenager replied that he was already on tickover! Moved both our pins and clattered us against the concrete piling. The name of the boat? Smoke. 🙄

The narrowboat in question "Smoke" is a private hire boat from Rowington. We were moored there recently and witnessed it being hired out to numerous people. It's a shame that information on lock etiquette isn't being shared with anyone or maybe it was, and they chose to ignore it!

Smoke can be found on Booking.com and Airbnb.  I’m not going to say any more on the subject!

Posted by Linda Gifford-Hull at 10:33