After the yellow sky and the red dust came the red mud!  The rain came down in torrents at times which just turned the dust to mud which then proved to be quite difficult to get rid of. 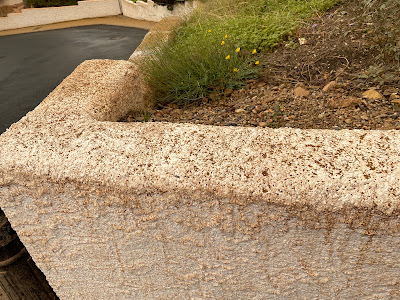 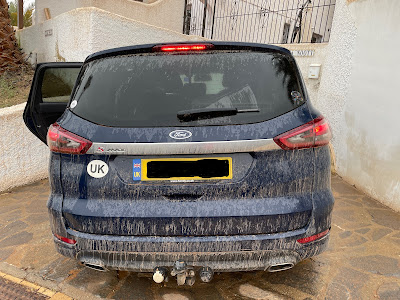 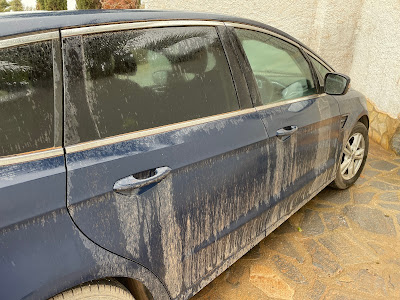 As this was Penny and Jim’s last day, we wanted them to do something fun – so we went to China and Iceland!!!  What could be more fun than that?

On our way home we came across a cat crossing the zebra crossing and all the cars stopped for it!  The Paseo is riddled with zebra crossings (no lights though).  Some are flat and some are over Bandas Sonoras (sleeping policeman to you and I)

In the evening Penny and I went down to the Chinese restaurant and got a take-away for dinner.

It was a wet end to Penny and Jim’s two week stay in Mojacar. I think I can probably count the number of sunny days they have had on one hand ☹

We went to the Parque Comercial for coffee and to visit the gift shop.  I love Souvenir María Rosa as they have lovely pottery – I buy a new dish every year!!

Back at the villa I started to wash down the balcony from the red mud.  It really was awful and gungy.  I had done about half when rain stopped play and I had to retreat inside. 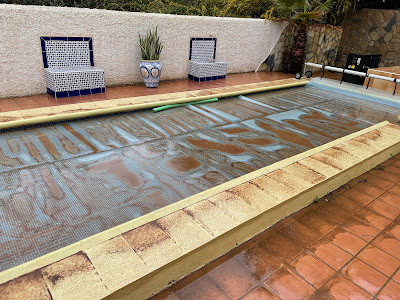 The pool man came and said that he would wash off the cover and then come back next week to hoover the mud up – we will see!  It does look better but not by much.

Once Penny had completed her packing, we set off to have a late lunch at Valery.  It was St. Patrick’s Day and Ashley was doing three Irish sets and we wanted to catch the middle one.  It was a very different Valery to the Valery we went to on Sunday – busy and lots of noise.  Poor Muffin did not enjoy it.  It was a great atmosphere and we really enjoyed it.  I think it helped Penny as a wet last day is not good. 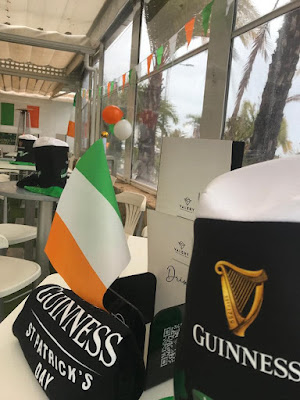 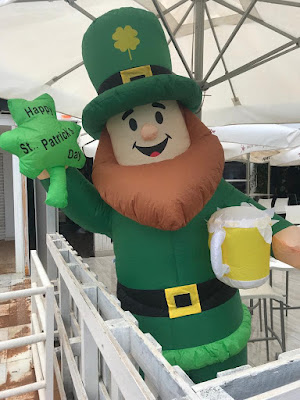 Our drive to the airport was uneventful, I found the assistance lady for Jim, and she took over after that.  Penny and Jim had a good flight back and landed at 11.30pm but it all went a bit pear shaped after that with the lack of assistance at Gatwick.

I will miss Penny and Jim, but we will see them in April as it is their Golden Wedding anniversary and we are renting a big old house for the family – 16 of us 😊

We have now got two weeks on our own – not sure if that is a good thing or not!!  Of course it is, Richard is my best friend 😊

We went to Turre market to collect two frying pans.  I bought one two years ago and use it regularly, but it could do with replacing now.

We went to Café Romer for a coffee, but we gave up waiting as there only appeared to be one chap serving and making the coffee.  However, the sun came out – I had been about to give up on it! 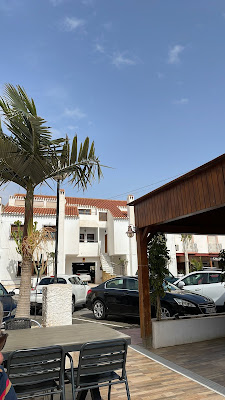 We went up to the vet’s to make an appointment for Muffin to have his regular blood test – Thursday next week.

So, why two frying pans?  My daughter, Victoria, and her new husband, James, are buying their first house 😊  I have been given permission to buy her some kitchen equipment, so I’ve been rifling through the Chinese shops trying to find some different things.  However, the frying pan is a must!

Posted by Linda Gifford-Hull at 11:23