The car was disgustingly filthy, so we decided to go up to the petrol station where they have about 5 different types of car wash!  There are two DIY bays (with roofs) and one DIY bay for high vehicles – these all have jet washers which cost €1 for a good amount of time.  There is also the traditional washer which moves over the car plus another DIY area, but this doesn’t have a rood.  Oh yes, there is also a dog wash!  Sadly, there was such a long queue that we didn’t even bother to stop – shame as it is always fun watching Richard washing the car with the jet washers as they have minds of their own! 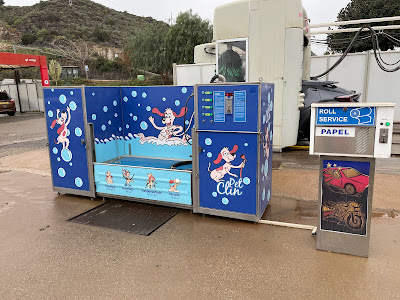 In the afternoon we went for a nice walk on the beach.  It wasn’t cold but the sea was still rough – I love watching the waves breaking over the breakwater. 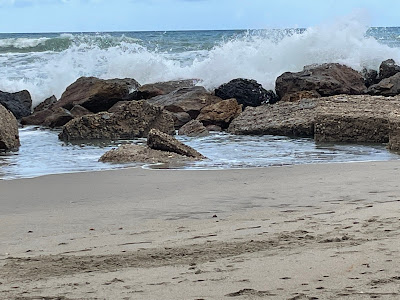 I also took this photo of the dish that lives on the outside table.  I have watching it fill up with rainwater, it is now full.  The bottom has red mud in it! 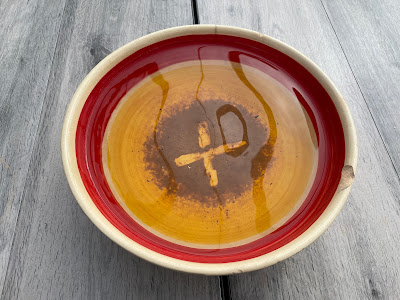 Oh how I hate a wet Sunday 😞  The Ex-Pats here are saying that this is the worst winter they have had for a long time, but that they do really need the rain.

Richard and I took Muffin on the beach where he had a great time digging big holes to bury his ball in! 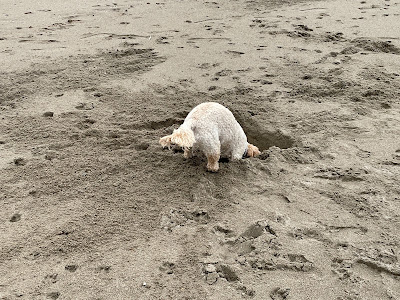 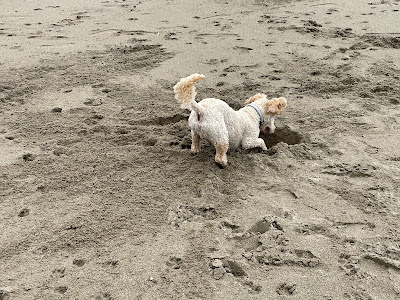 There was quite a wind blowing across the beach and sand was blowing everywhere. 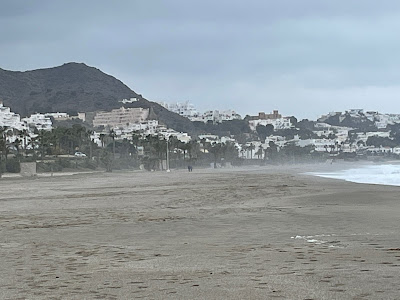 When I turned round the wind was blowing the water up causing a lot of spray. 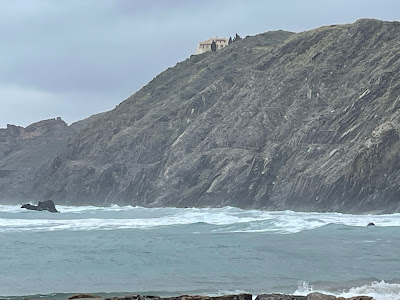 When Penny and I went to Chinese to get our take-away we had a glass of wine which I really liked.  I took a photo of it and had noticed that you can buy it in the UK for £9 a bottle.  The local supermarket here have it for €3.45!!  I bought four bottles.

We still had Jim’s motor scooter to take back, its such a shame as he only managed to use it three times as we just didn’t go anywhere while they were here.

Next stop was Paws, the charity shop, to take in some books and a bright lime green potty that I bought (from Paws) for Bobby to use.  Richard parked on the other side of the road, and I had to walk across the crossing, with cars waiting for me, with this almost fluorescent potty – I did feel a twit! 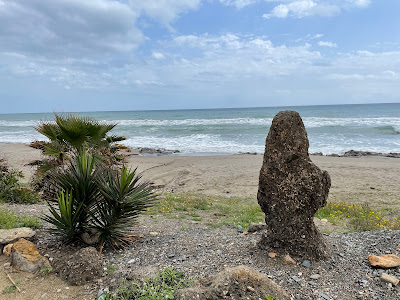 We didn’t have much to get in Mercadona, so we weren’t in there for long, but while we were in there the heavens must have opened as the roads were flooded.  There were ponds on either side of the sleeping policemen and people were being very sensible and driving slowly.

We stopped at Thomas’s and bought another six bottles of the nice white wine!

The pool man came and hoovered the pool, it looked horrid.  I can’t comment on what it looks like now as the cover is back on and is quite stained from the red mud. 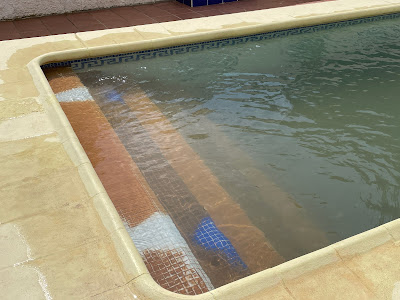 Back at the ranch I spent a lot of time trying to work out why I have some thumbnails for photos in my photos folder and just icons for others.  I tried everything there was on the internet, but nothing worked.  It was so frustrating.  As I write the blog in Word and then copy it to Blogger I lose the photos in the transfer so they have to be put in again and when you don’t know what you are putting in, it isn’t easy.
Posted by Linda Gifford-Hull at 10:57