We decided to go to the pet shop today and get the food that Arden Grange had suggested.  The owners of the shop don’t seem to speak any English, but we got by!   We stopped at another Chinese shop where I got a couple of noodles.  Chris and Dee came as we got home to turn the heater on in the pool and Chris gave Richard a lesson on how it works.  It has an air source heat pump to heat the pool which seems very efficient. However, we are having to pay for the electricity to heat it.  There is a solar system which has been fitted but they are waiting for a licence to come through before they can switch it on.  Dee found two more pool toys in a lock up – the boys should be in their element! 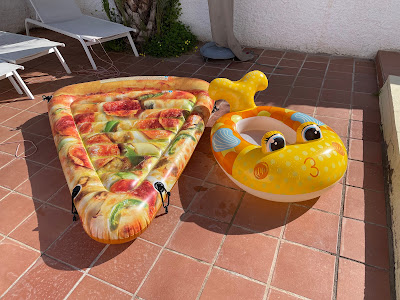 My daughter-in-law, Laura, is celiac and through the medium of Facebook I had been given some places that sell gluten free foods.  One of them is an English butcher who takes your order and delivers it to a local supermarket carpark!  She had gluten free pork pies, sausages and burgers.  We decided to have lunch out as we were having visitors in the evening.  We went to a new kid on the block called Vista del Mar.  I had been following them on Facebook but I’m afraid we were very disappointed by the service and lack of variety on the menu.  Our friends, Liz and Phil came in the evening for a catch up.  We met them back in 2018 when they were out here on holiday and were staying next door to us.  Some holiday though – they never went home!  They now have their residencia and have just bought their own place which they are moving into shortly.  It was lovely to see them and catch up on the last two years.

We needed to get the house ready for Robert, Laura, Tobyn and Bobby who were arriving the next day.  I still hadn’t finished sorting out the boys’ bedroom, so had to finish putting things away.  We went shopping to Lopez, a hardware shop, for a decent sized washing up bowl and dish drainer as we were having to wash up by hand!  Next stop was the Parque Commerical for coffee, they really do make a good cup and then I went to the Consum supermarket which is under the Mall.  Richard wanted to wash the car and get fuel.  Back at the villa we sorted ourselves out and went skinny dipping in a nice warm pool.  Richard hadn’t slept well last night thinking about the swimming pool and how much it might be costing us! 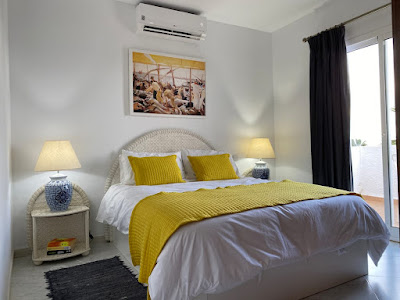 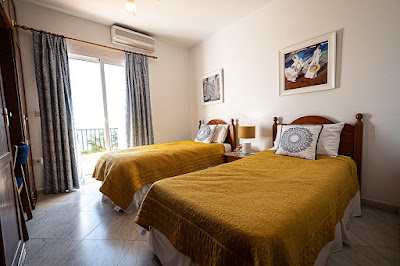 Today was a big day as Robert and the family were arriving.  The UK had had Storm Eunice yesterday and I was worried that the flights might be in disarray, but everything was fine.  I wanted to be at the airport by 9.45am so I was up early and ready to leave home at 8.45am.  I had to go on my own as we couldn’t get Richard and I, plus Muffin in the car along with four more people and their luggage.  As I walked into the arrivals hall, I got a message from Robert to say that they had landed. With all the extra Covid checks that had to be done they seemed to take ages to get landside.  They hadn’t told the boys that I would be at the airport as I wanted to see their reaction when they saw me, but I had mask on, and it took a while for Bobby to see me!

I expected everyone to go to sleep on the way home as they had been up since 2.30am but they all stayed awake. After lunch everyone, except Laura who was unpacking, had a short sleep.  All the Renwicks then took advantage of the warm pool and all swam.  I had been telling Laura about the Chinese shop and the fact that they sell everything, so we went and got the boys some hats and had a look round.  It was then a short walk on the beach before heading home for supper and early nights all round – Laura had only had 3 hours sleep last night!  Dull day 😞
Posted by Linda Gifford-Hull at 10:52