The internet in the villa is not very good at all so I have been using my UK MiFi, but it ran out of data today.  I had decided to get a Spanish sim next year as it looks like roaming will be switched off in May this year by UK phone providers.  Lobster is a Spanish company but appears to be run by Brits.  They do three deals, small (18gb), medium (40gb) and large (70gb).  You also get unlimited calls in Spain to the UK and 10 other countries.  It’s great as it’s a monthly contract which can be turned off and on when you want it.  Anyway, I went and bought a sim to tied me over until we get home.

I popped into Thomas’s and bought their last six bottles of the wine – I hope they have some more stashed away!  You can bring into the UK, 18 litres of still wine and 4 litres of spirits, duty free.  By my reckoning that is 24 bottles EACH!  I think we will be leaving Muffin behind when we go home!

The rest of my day was spent trying to get the new sim to work in the MiFi.  It was a nightmare, and I was close to tears when suddenly I did it!  Quite simple really.  I opened the Huawei app on my phone and created a new APN (access point name).  The speed is excellent, I just hope it all keeps on working well.

There was a horrendous cat fight going on outside this afternoon.  I could see a ginger cat and a black cat with their noses about a foot apart howling at each other!  I tried clapping my hands and setting Muffin free to bark, but nothing stopped them.  When we were here in 2019 there were a lot of stray cats and even more kittens, but the charity Paws was trying to catch as many males as possible and castrate them.  It certainly seems to have cut down the feline population.  I found “Ginger” having a good rest a bit later on. 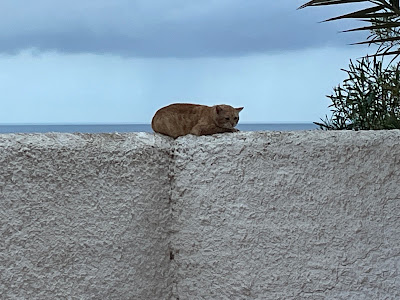 I thought I would put in this photo which I took off the internet of one of cranes working down the road.  If you can’t quite see what it is lifting, it is a supermarket trolley! 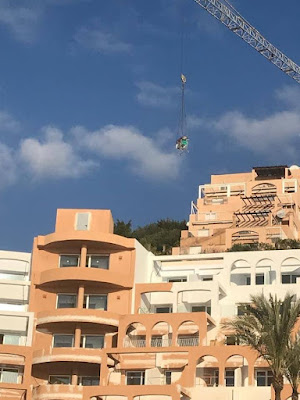 When we went to bed, I could hear the waves crashing, louder than I had heard them before.  I peered out and all I could see on the shoreline was lots and lots of white surf.  It must have been pretty rough out there.

Well, I thought we had had some bad weather, but other than the calima days today has got to be the worst we have experienced in our five visits to Spain ☹  I refuse to go home!  We are British and will stick it out until the bitter end!!  There is light at the end of the tunnel though as there should be some good weather coming our way at the weekend.   Hopefully by the time I actually publish this post we will be back basking in lovely sunshine! 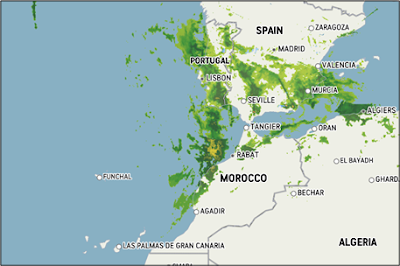 The electricity went off and I was just about to message Dee but thought I should just check with Richard first.  Wonder of wonders it had reset itself.

What would be a good job for a wet day?  Sort out my lists for Spain 2023!!!!  I live by lists – anyone will tell you.  Not only did I do that, but I also started on my lists for our trip to Canada in May.  Have I told you about Canada??  I don’t think I have.  On May 11th we fly to Boston for 3 nights.  On the 14th we fly to Toronto, pick an RV and spend 14 days around part of the Great Lakes.  A quick whistle stop tour of Toronto then we fly on to Calgary, pick up another RV and spend 19 days crossing the Rockies and venturing onto Vancouver Island before spending 3 nights in Vancouver and then flying home.  The trip of a lifetime 😊

The rain stopped for a while in the afternoon, and we took Muffin for a walk along the Paseo, the beach looked really uninviting.  We walked back via the Euromarket as I wanted to get a couple of stationary bits for my lists.

The sea is still rough. 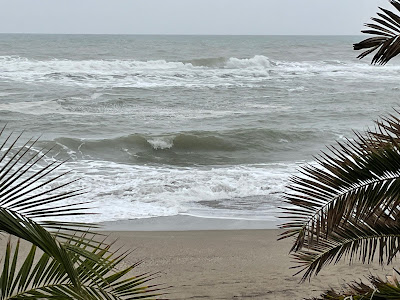 There are little dry rivers at intervals under the Paseo which only have water in them when there has been a lot of rain!!  This is one of them! 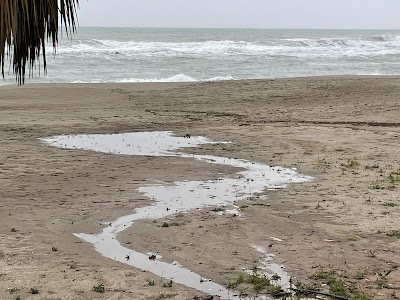 More red dust overnight, but not as bad as last time.  With less dust and heavy rain most of it has gone.  The car was a real mess and the red mud had gathered where the bonnet meets the body of the car. 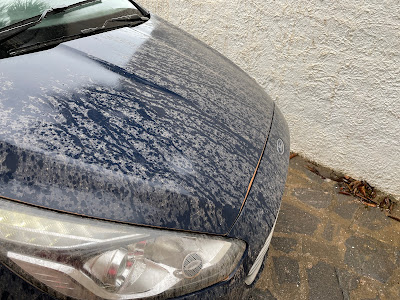 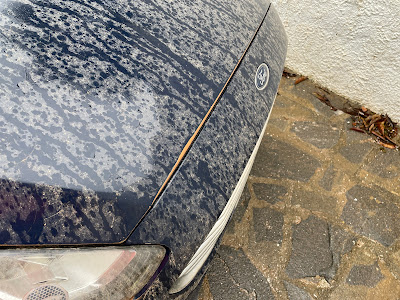 Muffin had to have a blood test this morning, so we headed to Turre to get it done.  I feel for Muffin as nowadays he only goes to the vets for either something to be taken out or something put in, always with a needle.  However, he always gets a treat from Ellen 😊

From Turre we went to Vera Playa to the supermarket – anything for a change!  It is a fairly new store and is nice to shop in.

On our way home we noticed that the big dry river bed that runs down into Mojacar Playa had water in it, we have never seen it before and don’t really want to see it again.  Unfortunately, we couldn’t stop to take a photo.

We called into the car wash but there was a queue so gave up.  Those cars hardly look dirty compared with ours. 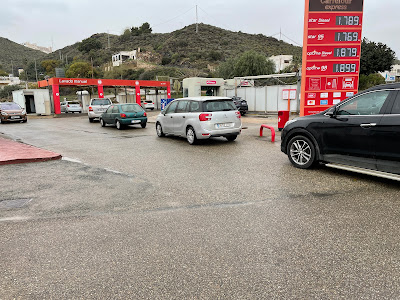 I spent the afternoon collating all the information I had got on the Canadian Rockies and putting it together in a book.  It was one of those jobs that I had been putting off as I couldn’t think how I was going to do it, seemples once I got my brain into gear!

When we first got to Spain you may remember me bragging that I had been doing batch cooking.  When I checked in the freezer on Monday to see what we could have for dinner there was large pot of bolognaise sauce and two lots of chilli – enough for 4 in each.  Monday, we had chilli with rice and Tuesday it was “El Gaucho” pie.  Tonight, we had invited Liz and Phil round to have shepherd’s pie with us.  There wasn’t a dish big enough to make it in, so I went down to the Euromarket and bought a traditional Spanish earthenware dish (Victoria can have the dish for her new house). 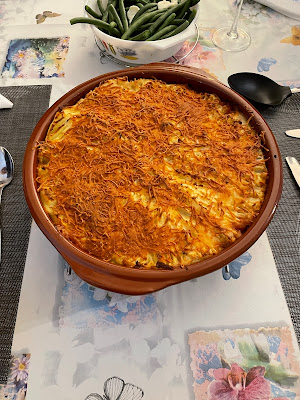 We had a lovely evening with Liz and Phil and will be meeting them again next week.

Posted by Linda Gifford-Hull at 10:20