We had to wait for the property manager to come and sort out the problem in our en-suite again.  The en-suite was only put in last summer, but the plumber has used concertina type plastic waste pipe from the toilet. I’m not going to say too much here and just let your imagination work overtime!  I felt so sorry for Chris as I could hear him retching upstairs ☹  I think that, once we have gone, Chris will have to take the floor up and sort it out properly. 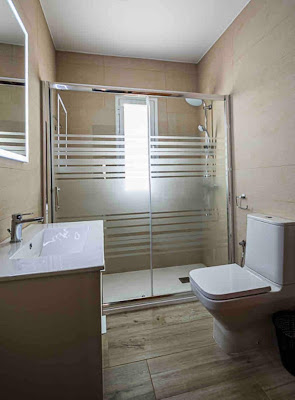 After the rain at the weekend the car was filthy, so we took it up to the car wash.  Richard loves using the DIY system.  Its €1 for a wash and €1 for the rinse.  After 6 pairs of sandy feet in and out of the car it needed hoovering out to.  €1.50 for 5 minutes and it’s a good powerful vacuum too.

A quick shop in Mercadona then back to the villa where I, once again, sat down to do some more blogging.  I was really behind – that will teach me to leave it so long.

In the morning we had an appointment to visit the villa we had booked for next year.  I had been worrying about it and it turns out that Richard had been too.  The villa itself is lovely with great views and a kitchen to die for, but it doesn’t get any sun, except for the roof terrace, after midday.  It is also on three floors and as Richard and I both suffer with painful knees we really weren’t sure if it was going to work for us.  We went and had a coffee in the lovely sunshine and mulled it all over.  We decided that it really wasn’t for us ☹  However, I emailed Amanda, who owns this year’s villa and we have struck a deal for next year.  More than we wanted to spend but it will be well worth it 😊 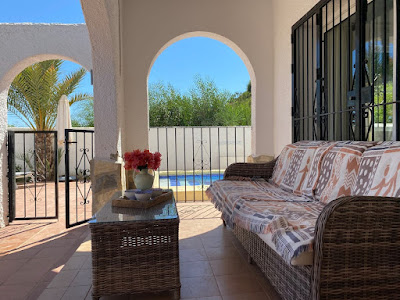 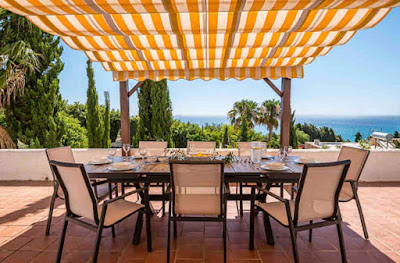 Quite a strong wind got up in the afternoon and even though the water in the pool was 28° the wind made it rather chilly so neither of us were in there for long.

The good part about a windy and warm day is that I got three loads of washing dried – just two more to go.

Richard and I sat out having the drink before dinner and were joined by our local, friendly sparrow.  He was waiting for a peanut or two! 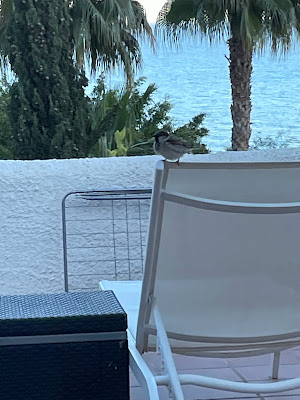 Penny and Jim were arriving this evening, so Richard and I did the housework and sorted out Jim’s bedroom as we had been using it as a food store and dumping area.

We decided to go out for lunch and went down to Levante.  It had only re-opened on Monday after being closed for some time.  It wasn’t open when we were here in 2020 but today it looked just the same as it was in 2019 and the menu was the same, so I don’t really know why is was closed in 2020. 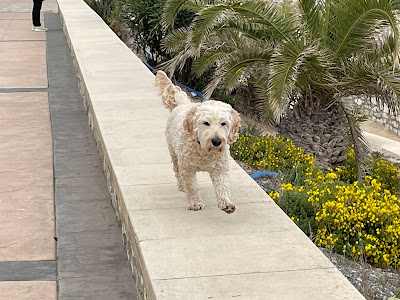 We went down to the ice-cream parlour, Gelateria Italiana Alberto, for dessert.  They had re-opened after the winter on Saturday.  The ice-cream there is lovely, but I do wish they would change the menu a bit. 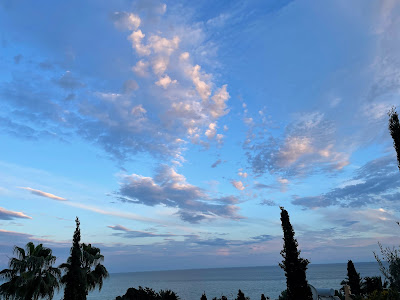 Penny and Jim’s flight was due in at 8.55pm so we left here just after 7.30pm.  As usual the flight was early, landing at 8.37pm.  Jim has assistance at the airport, and they were the last people out of the arrival’s hall.  They had been waiting for ages on a bus to get to the terminal.  We got back to the villa about 10.30pm and had wine, baguette and cheese as we were all hungry.

Posted by Linda Gifford-Hull at 13:07