Friday 20th May – Inverhuron Provincial Park to Point Farms Provincial Park
As we hadn’t got far to go today we went to look at the beach before we left.  It was really beautiful with lovely white sand.  There were a few people on the beach but it was early.  We went to the office and returned the secret power cable having done a recce to make sure no one could see us! 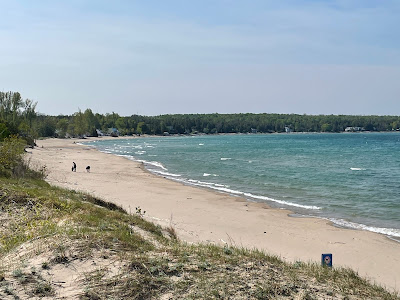 We made a deviation to Port Clark as I could see it had a lighthouse.  It was lovely as you can see from the photos.  We made a coffee and sat looking down the beach.  A Canadian couple came up and were chatting to us.  As usual the lady has family in England as so many do.  They were lovely people.  In fact, everyone in Canada is lovely and friendly.  I am trying to find a unfriendly, unhelpful person, but it is really hard to do! 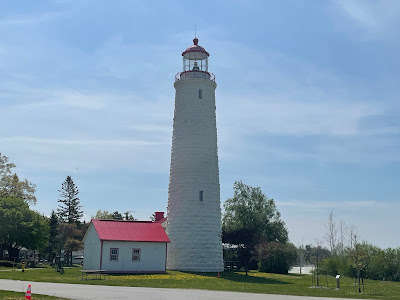 In the days before there were lighthouses on Lake Huron, ship travel north of Goderich along the Bruce Coast was hazardous. At Point Clark, rocky shoals stretched 3.2 kilometres out into the lake. The only warning for mariners was a lantern hung in a pine tree.  With shipping and water travel on Lake Huron growing, the Department of Public Works built an Imperial tower on what was originally known as Pine Point. One of six lighthouses constructed from the same plans, the Point Clark lighthouse beacon began flashing its warning on April 1, 1859. That same day, its sister lighthouse on Chantry Island went into operation.  Built of limestone quarried at nearby Inverhuron, the Point Clark lighthouse stands 26.5 metres high and its flashing white beacon revolves every thirty seconds. In 1967, the Point Clark lighthouse became the first in Ontario to be declared a National Historic Site.
We arrived at Point Farms Provincial Park and asked for a longer electricity cable, we aren’t even looking now!  After our surreptitious borrowing of a cable yesterday this time the lady had to fill in a form – in triplicate!  No photocopies!  It took 30 minutes!
Before dinner we went for a walk on the beach which wasn’t as nice as Inverhuron or Point Clark as it was a bit stoney.  We got a bit lost getting back as the sign wasn’t on the beach it was set back and we didn’t see it until we actually started on the path, 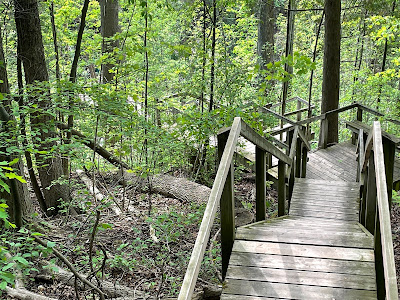 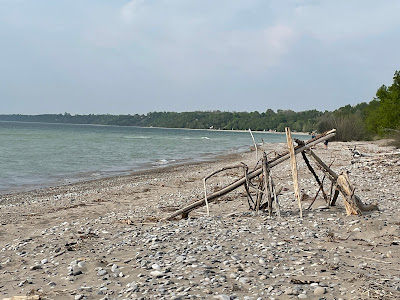 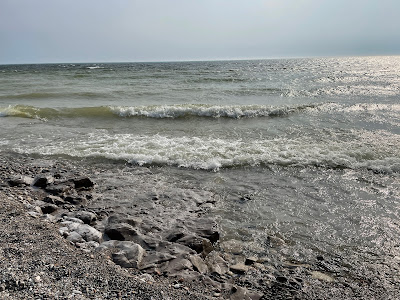 Point Farms Provincial Park was once the site of a popular Victorian resort from the mid 1800s until it ceased operating in 1915.  The summer resort hotel was built by J.J. Wright in 1871. The hotel burnt down and was rebuilt within a few years. The royal family visited in 1875.  According to the Point Farms Provincial Park’s Master Plan, “Because of the increased prosperity in the county during the 1870s, the hotel became a summer resort for city families and a dining facility, picnic ground and holiday resort for Huron County residents until 1915 when its success declined and operations halted.” The remains of the hotel were removed by wreckers in 1924.

Saturday 21st May – Point Farms Provincial Park
Richard’s Birthday 🥳
Point Farms is just north of a town called Goderich which we discovered was having a farmer’s market today.  I love a farmer’s market and Richard had discovered that the town has been named one of Ontario's best small towns by Comfort Life, a website for retirement living in Canada!
Whilst doing some research on Goderich I discovered that it was first laid out in 1828 and is named after Frederick John Robinson, 1st Viscount Goderich, who was prime minister of the United Kingdom at the time. It was incorporated as a town in 1850.  I have never heard of Frederick Robinson let alone the fact that he was a British Prime Minister!
The town is intriguing as it is built round the courthouse and the roads are built on a grid basis, consequently it was nice and easy to drive round.  I thought that on a market day on a Saturday there wouldn’t be anywhere to park, how silly am I!  We are in Canada not a Cornish village!
There weren’t very many stalls but it was the first of the season.  There was lots of bread, cakes, honey etc.  Nothing for us.  We went to get a coffee to go, but when we got out of the shop it was raining so we beat it back to the RV, but we still got wet.  The town is pretty but what an eyesore the courthouse is.  I guess it was revolutionary in its time. 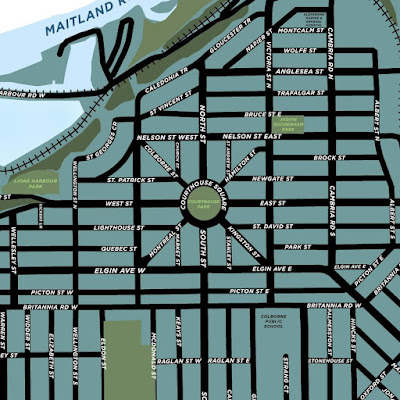 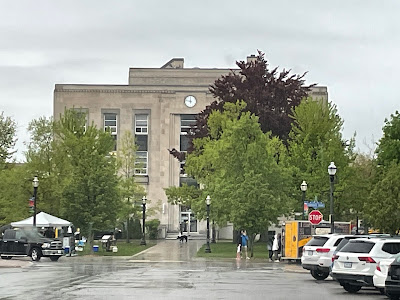 From the town we drove to the water.  We found an RV park and sat and waited for a) it to stop raining and b) for it to get nearer to lunch time!  I had done some research and found a restaurant in an old station building on the waterside called the Beach Street Station.  The menu wasn’t huge but what we had was excellent.  I wanted to use their Wi-Fi to update the satnav, but it struggled so we ended up by having three courses plus coffee!  The satnav finally managed it! 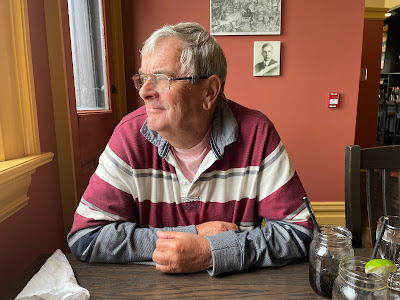 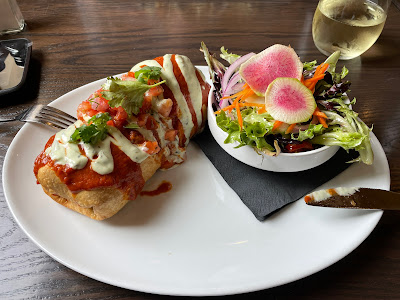 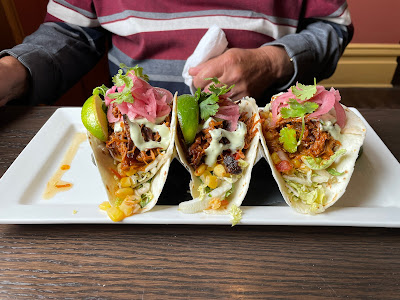 The Canadian Pacific Railway (CPR) Station in Goderich Harbour was built in 1907 at the terminus of the Guelph & Goderich Railroad.  The CPR ceased passenger service to Goderich in 1956 and freight service in 1988.  The 80 miles of rails were removed in the years following.  Eight of the original stations on the Guelph-Goderich Line remain, few remain in their original locations.  In 2013 after three months preparation the 400 ton, triple brick landmark was raised up and over a three day period was delivered safely to its present location.  Several hundred local residents and visitors witnessed its touchdown on August 1st 2013.  Restoration efforts began immediately and concluded June 26th 2015. 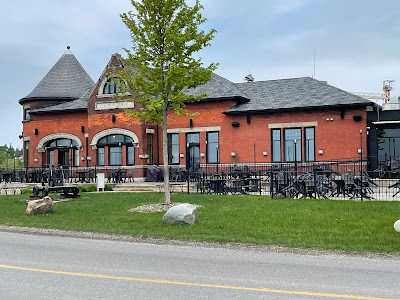 When we had finished lunch the rain had stopped and it turned out to be a lovely afternoon.  We went for a walk along a fairly new 1.5 kilometre boardwalk through a park like area.  It was really attractive. 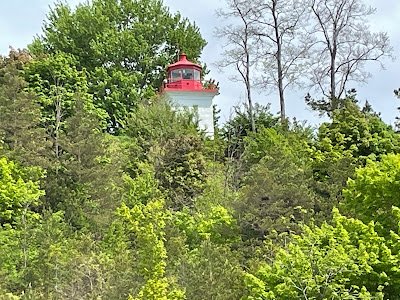 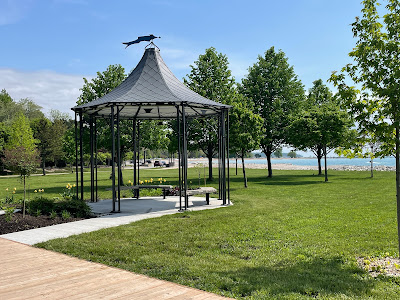 Back at the site I didn’t have any cooking to do and, in fact, we didn’t eat anything else!  Neither did we watch TV just read.
It had been a lovely day.

Posted by Linda Gifford-Hull at 04:40