We are moored across from a children’s nursery, Crossley Mill.  The children spend quite a bit of time playing outside but today, as the sun is shining, they have all got their hats on – it is so sweet.

Muffin had been getting grubbier and grubbier and we decided to give him a shower this morning.  The water was filthy and he looks so much better now!


Our plan for the afternoon was to go to Heptonstall on the bus.  We had been told that it is a lovely village so didn’t want to miss it.  The village isn’t far from Hebden Bridge but it’s up a very steep hill and the bus really seemed to struggle.  We weren’t too sure what to expect but as we got off the bus we found a village map and a note that there is a guide book available from various outlets.  Richard bought one and we found a map and a description of the various points of interest.


Our first port of call were the churches.  There are two churches in one churchyard which is an unusual feature. The original church was named after St Thomas a Becket, founded circa 1260 and was altered and added to over several centuries. It was damaged by a gale in 1847 (and is now only a shell), so a new church, St Thomas the Apostle, was built in the same churchyard. This suffered a lighting strike in 1875. The old church ruin is now carefully maintained and occasionally open air services are conducted there.  There are a number of interesting graves in the churchyard.
As we wandered around we were very taken with the cottages – some of them very old.  Stag Cottage is the oldest having been built around 1580.  We came across “Top o’th’ Town” – this dates from medieval times when this was the topmost extent of the village.  Just up the street is one of the village’s four water pumps – it is dated 1891.  We found a cottage called Star Chamber, the book says that it may well have been named after the Star Chamber, a notorious court in London.  It is recorded that some Heptonstall people were taken before this London-based court in the 16th Century and it has been suggested that this local building may be connected with the trial.  The Methodist Chapel is interesting as it is the old Methodist Chapel to have been continually in use since its inauguration.  John Wesley preached there in the 1760s and, in fact, laid the foundation stone - the octagon shape was to his recommendation.  Strangely enough people would go to their Parish Church and then supplemented it with by Methodist preaching.

The name Heptonstall is from the old English “Hep” – Wild Rose or Dog Rose and “Tunstall” – a farmstead where cattle were pastured.  So Rose Farm!  The village is not mentioned in the Domesday Book – which is surprising as a hamlet certainly was there then.  The land was never sufficiently fertile for profitable farming so a dual economy was formed with the production of cloth.  The population of the village rose to over 4,000 – the population today is about 900.


There was a Battle of Heptonstall in 1643.  Halifax and the surrounding wool towns sided with Parliament and the Roundheads against King Charles I and the Cavaliers.  The battle was won by the local forces with their local knowledge.
There is a lot more to tell about Heptonstall.  I have only picked out my favourite bits - I won’t bore you with any more.  The one thing I will say is that the cobblestones of the main street are very noisy.  Apparently they were covered with tarmac for many years but following major road works in 1990 and a petition by the residents the cobbles were reinstated.  I wonder if the residents now regret their decision! 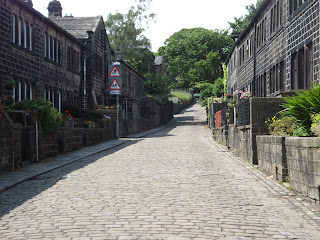 We took our bus back down into Hebden Bridge – it was a lot quicker going down!
Posted by Linda Gifford-Hull at 09:14