We were rather late waking up this morning – I had been having wild dreams about a narrowboat changing into a motorhome and a motor cruiser changing into a caravan.  Oh and a boiling kettle!  Anyone any good at translating dreams?


Shortly after moving off we came found a boat lying across the canal - we had noticed the other day that it wasn’t tied on properly.  A gentle shove and it went back into the side.  I don’t know whether it has been abandoned but the hull is full of rusty holes.  We then passed Knackered Navvy who we had travelled down the Caen Hill flight with in 2010 but sadly there was no sign of Roger and Sue. 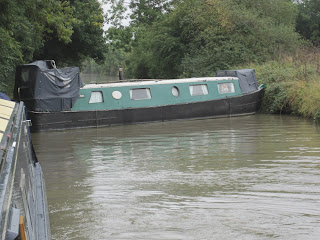 We had 12 locks to do and came across two lots of thoughtless boaters.  Firstly we had been following a boat up the locks and eventually came across them.  They were just leaving the top of a lock as we arrived at the bottom.  We thought, stupidly I guess, that they would wait for us at the next lock but no they just carried on going up double locks on their own – hey ho.  The second lot we came across at the Bascote Staircase Lock.  They were just going into the top as we approached the bottom.  It was in their favour but as Richard went up to suggest that we did the staircase shuffle they started emptying the top lock – the bottom lock was still full!!  Richard asked if they were going to empty the bottom lock and they looked at him as if he had two heads!  Suddenly they realised that they did indeed need to empty the bottom lock – hey ho again!
We had planned to moor at the Blue Lias and hopefully meet Brian and Diana from NB Harnser whose blog I follow.  When we got there it was chaos!  Boats moored three abreast and certainly no room for Mary at the inn.  However we cheekily reversed back and moored up by the lock taking about 3 feet of lock waiting area L


I had always thought that The Blue Lias was a strange name for a pub but I’ve now discovered that blue lias is a geologic formation which consists of a sequence of limestone and shale layers, laid down in latest Triassic and early Jurassic times, between 195 and 200 million years ago. The blue lias is famous for its fossils, especially ammonites.