I just couldn’t get out of bed this morning!  I had breakfast in bed then watched Heir Hunters and Homes Under the Hammer I finally got up.  I really think the heat is getting to me.

We had planned a day off but old “itchy feet” aka Richard had other ideas!  Dot and Gordon from Ewn ha Cul are joining us tomorrow and he wanted to find a nice spot for us both – fat chance on this river.

We tried to get rid of our rubbish at Lee Valley Marina but apparently their bins are full and they won’t take any more!
Standstead Abbots looks like a nice village and if we can moor up on the way back we will stop and have a look. 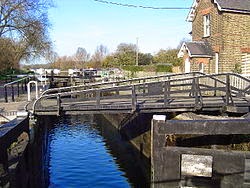 We went through Standstead Lock where we had been warned not only about the swing bridge over the lock but the violent paddles on the top gates.  We tied up with two ropes and I even shut the front doors as I had been told about people opening both paddles and swamping their boat and sinking!  I’ve just been researching Standstead Lock and found this – it’s quite old but amazing!
Between Standstead and Hardmead Locks there are some lovely moorings but guess what?  Yup you have it – full of bridge hoppers.

After Hardmead Lock I was down below making lunch when Richard found somewhere to stop to eat just before Ware and we didn’t move from there!