It seemed to be a very hot start to the night but I think I was so exhausted that nothing would keep me awake! 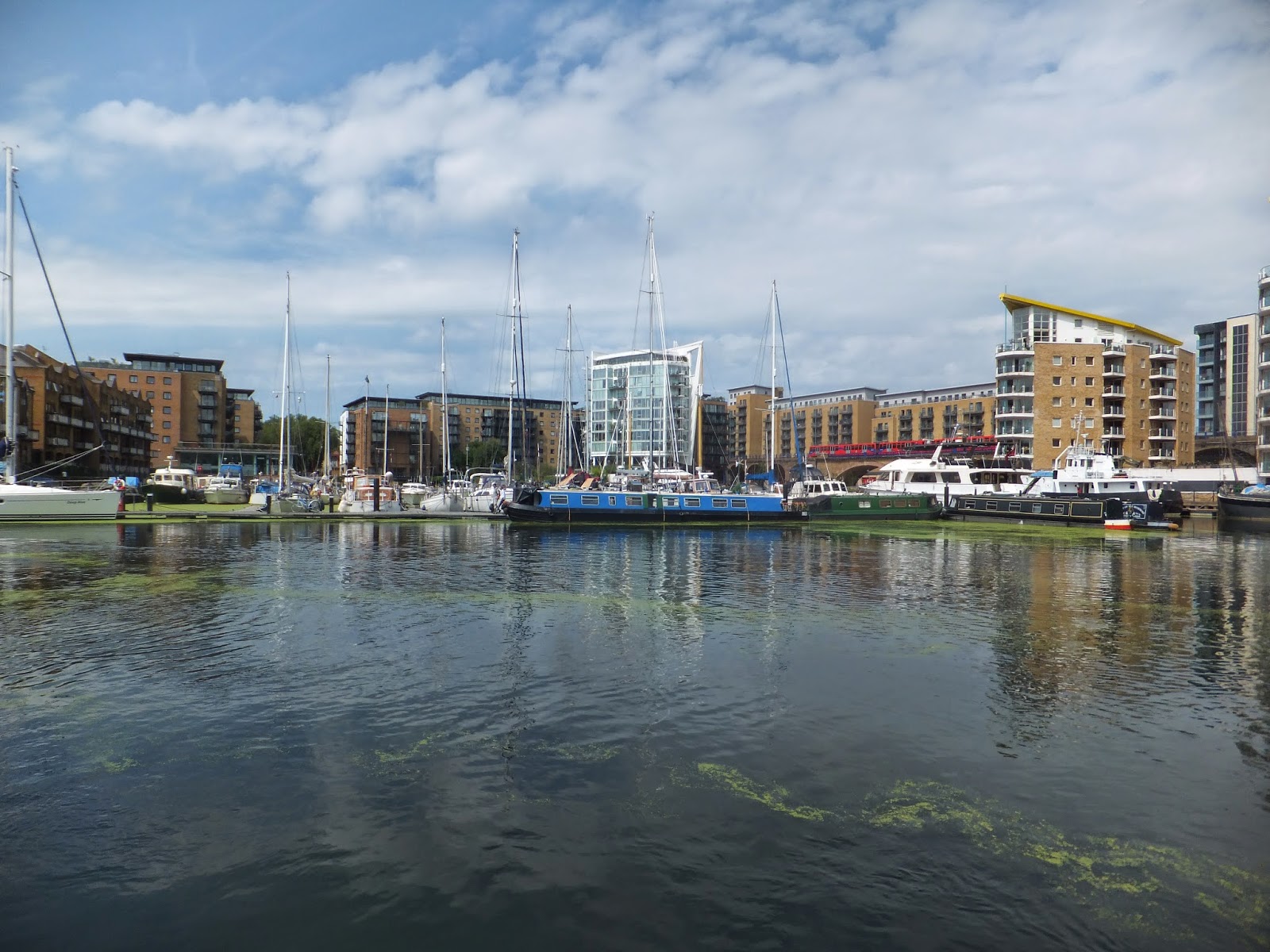 Gradually we came too and then were up and about.  I spent the morning trying to sort the blog out – I would have thought that after a day like yesterday it would have been easy but I took 161 photos which all had to be sorted first!  We had decided to leave with Peter and Ann on Slow Pace whose home waterway is the Lea Navigation so not only would we have lock buddies but people who know the river.

The first part of the trip was round the edge of the Olympic Village but at present most of it is behind hoardings but I was fortunate enough to get photos of the stadium and the media tower. 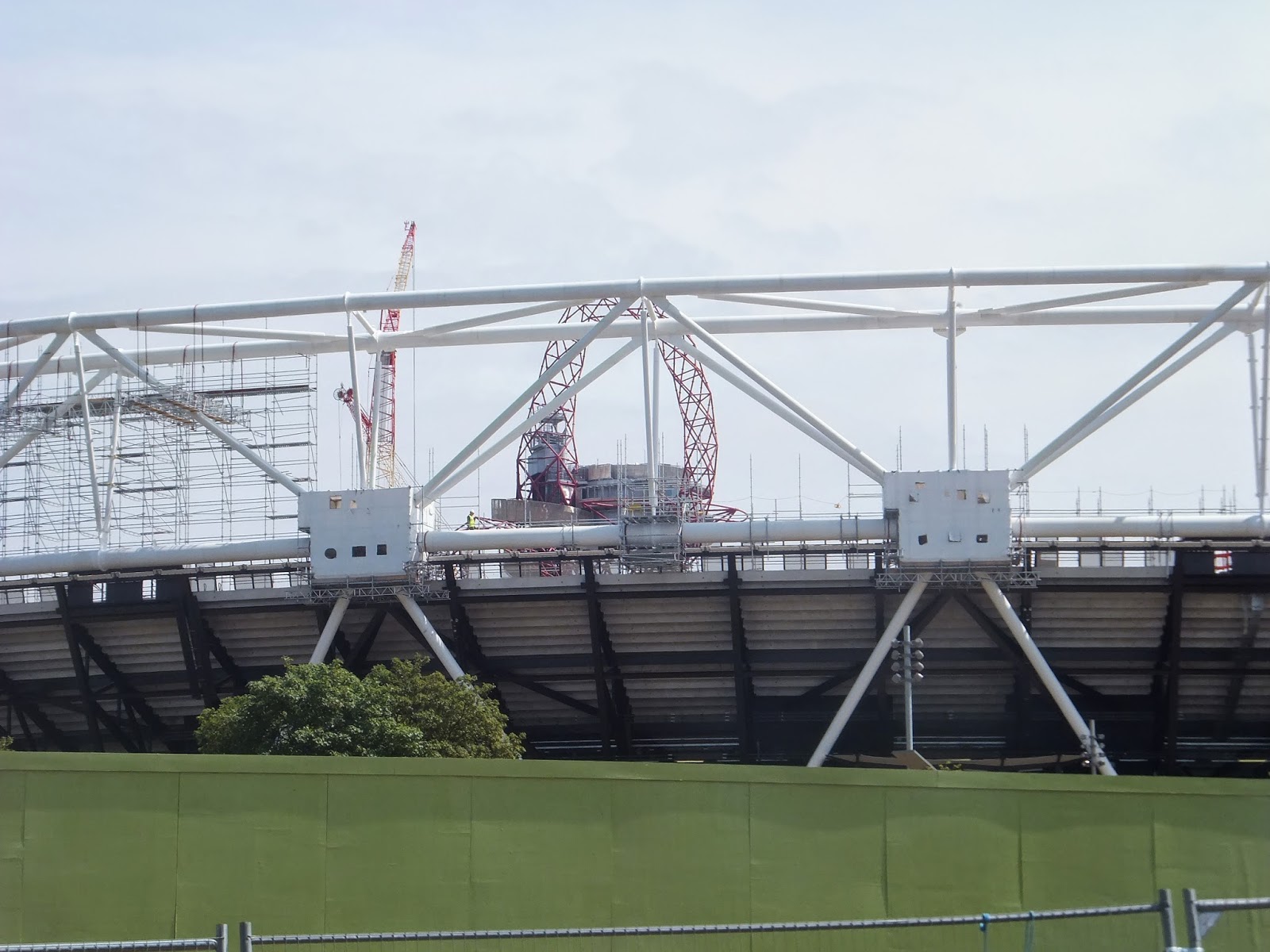 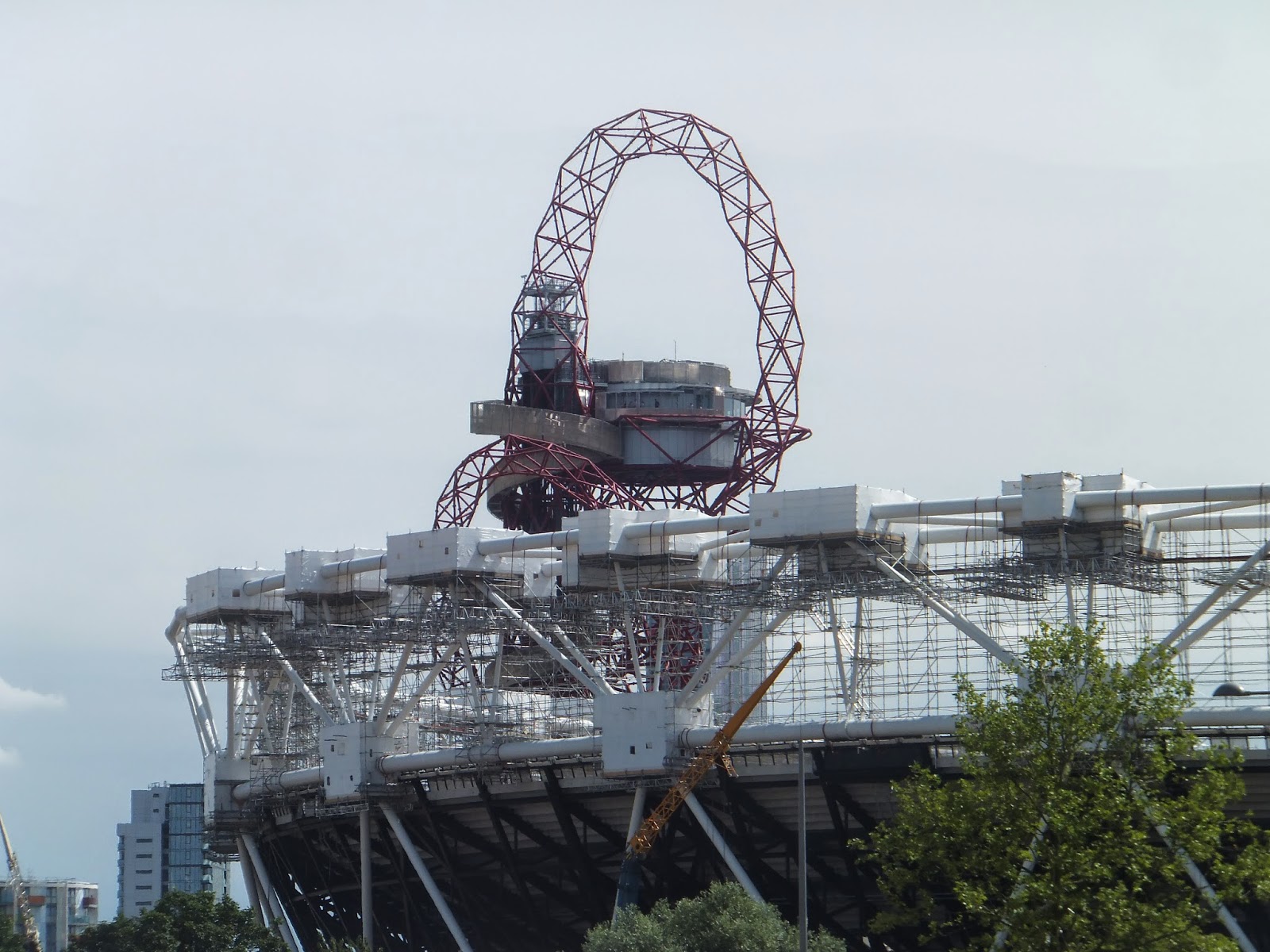 I thought that the K & A was full of live-aboards but the Lea Navigation is 10 times worse!  The only good thing is that it is a river and wider than the canal so we didn’t have to go at tick-over.  There were some interesting boats as well as some quite nice ones.  There were quite a few waterside eating holes which were heaving on a sunny Sunday.

There is a lot of artwork alongside the river – it’s not really graffiti it’s much more sophisticated. 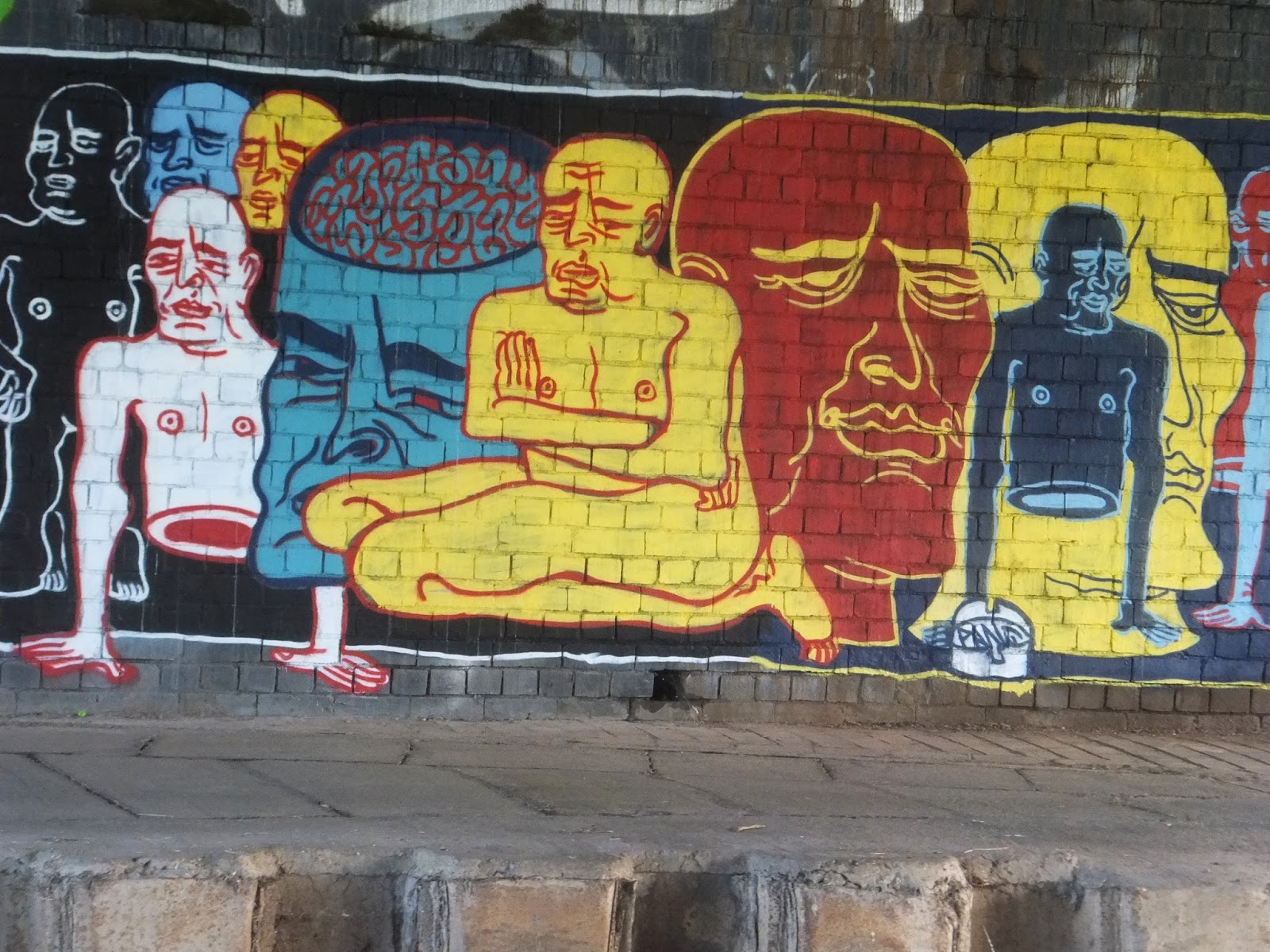 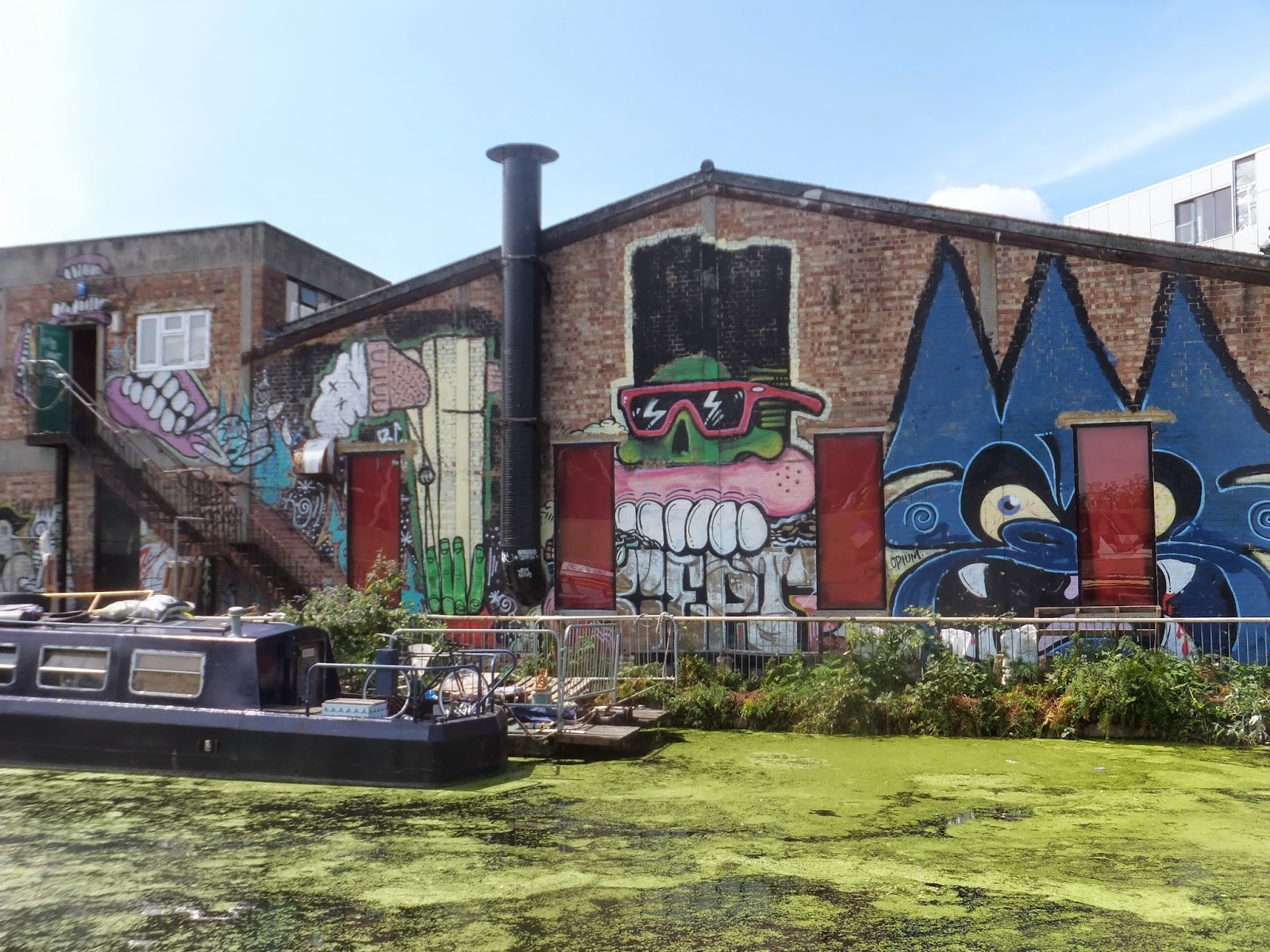 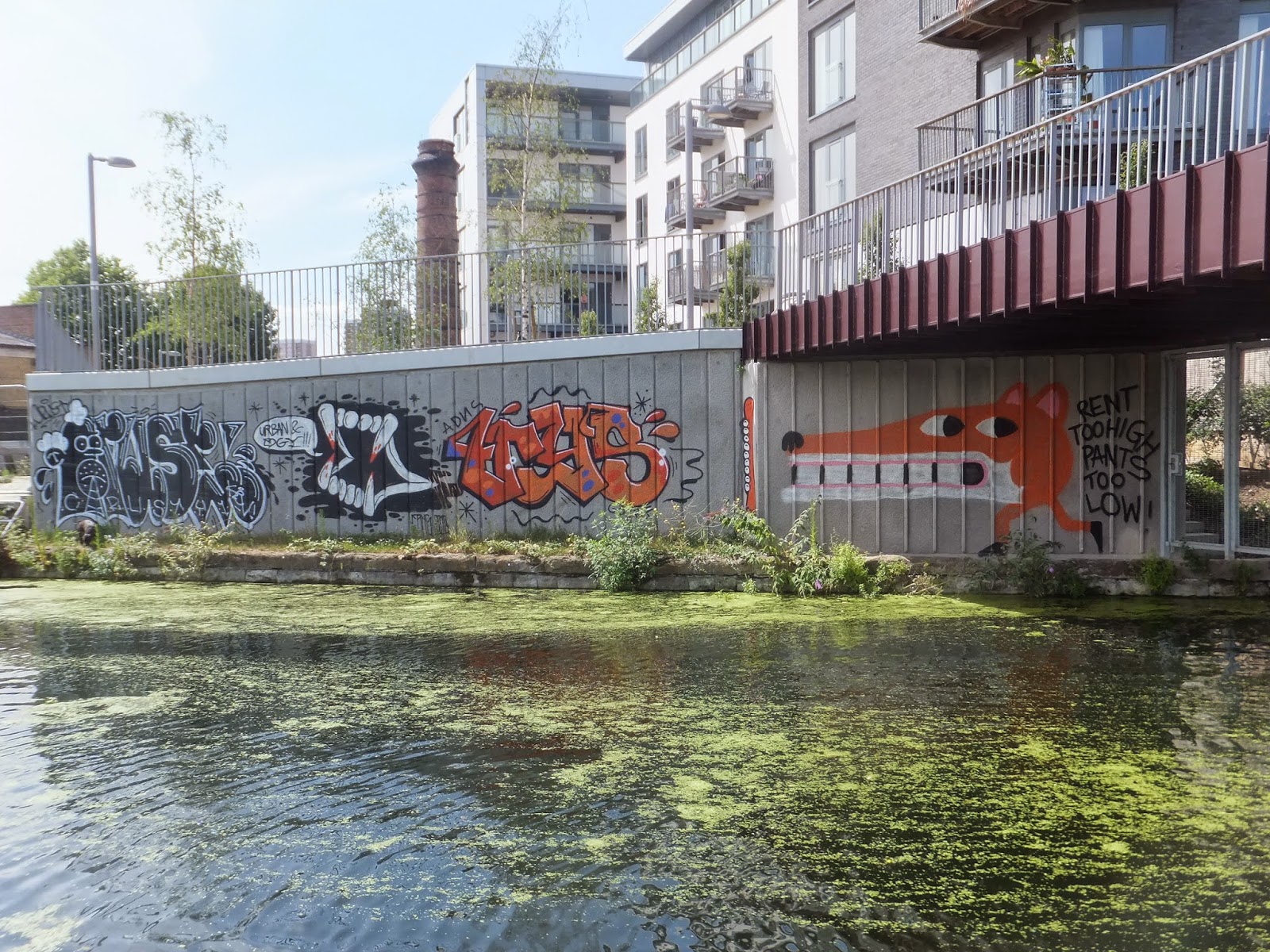 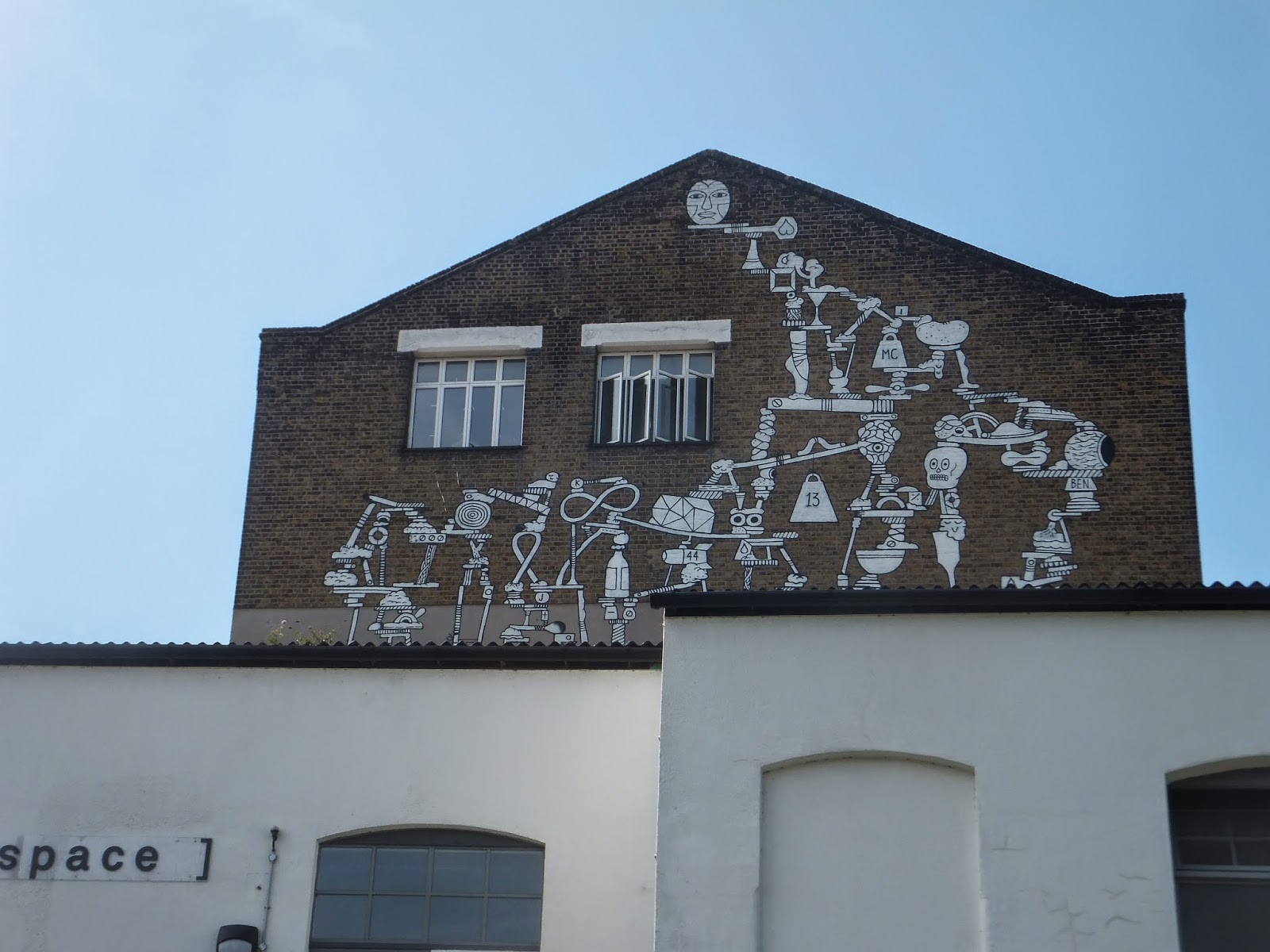 The first locks are electric, then they become semi-automatic then its back to using the windlass and brawn!  The first lock was strange as the top gates were only the same level as the water so it did look odd. We had an incident as we passed the Navigation Inn at Ponders End (so it does exist!).  There were three boats moored outside – two of which were abreast.  Opposite was another boat.  Slow Pace was in front of us and as I went by there was a lot of shouting from the pub – I throttled back and looked to my left where the shouting was coming from - then there was a graunching noise from my right.  I looked over and I had hit a dinghy that was across the river.  By this time it was on its side.  A young lady appeared from the boat most upset and shouted at us.  We asked if she wanted us to try and rescue the dinghy and she said yes so we pulled over, as did Slow Pace, and we all helped pull it out.  The fact that there were two paving slabs at either end of the dinghy didn’t help – from the sinking point of view or the rescue!  It didn’t take long to put things to right thank goodness.  One of the things we have noticed along the river is that many of the liveaboards have dinghies tied alongside but what we think had happened is that Slow Pace sucked the dinghy out as it passed which is why we just didn’t see it.  Still all’s well that ends well. 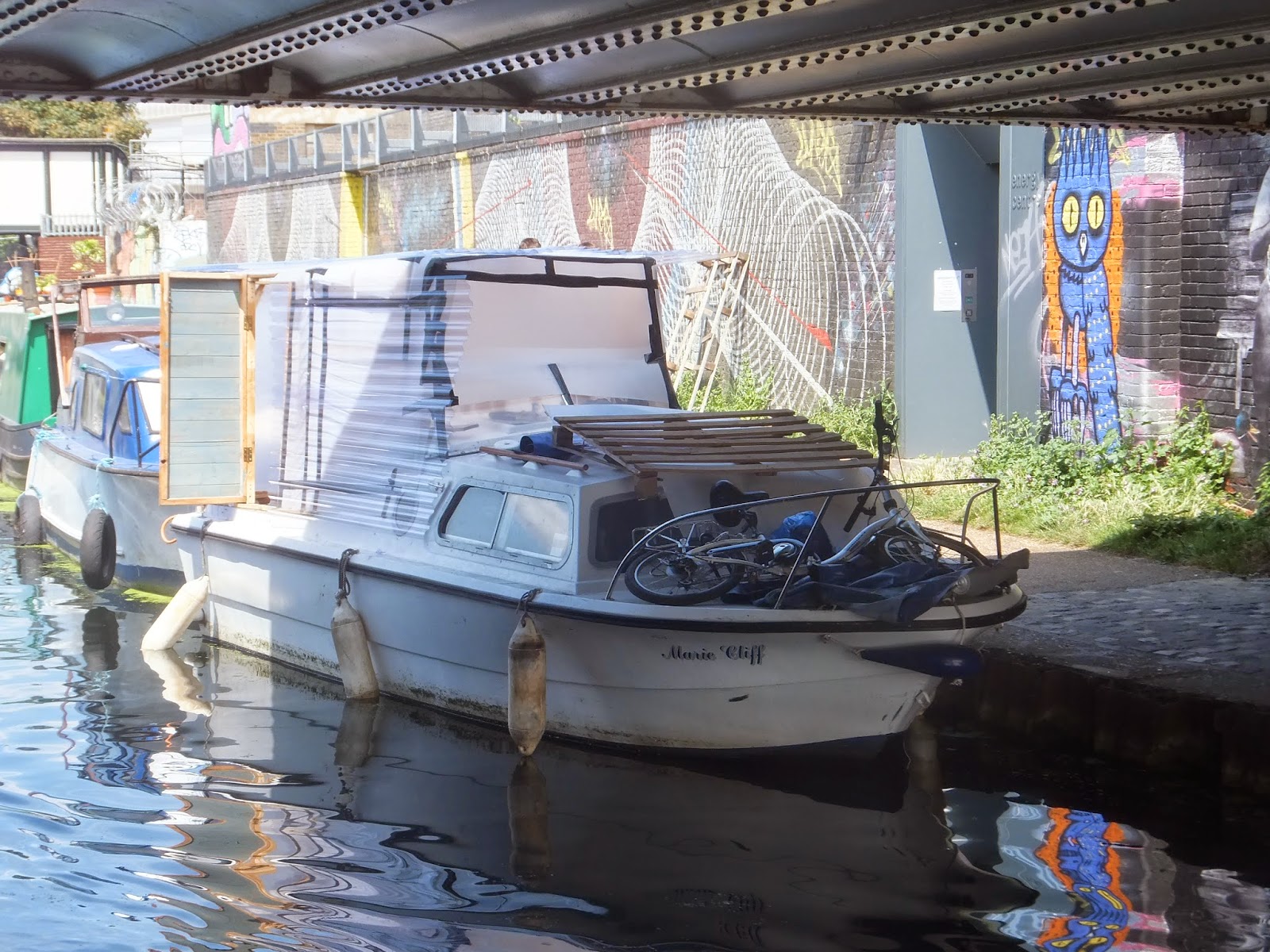 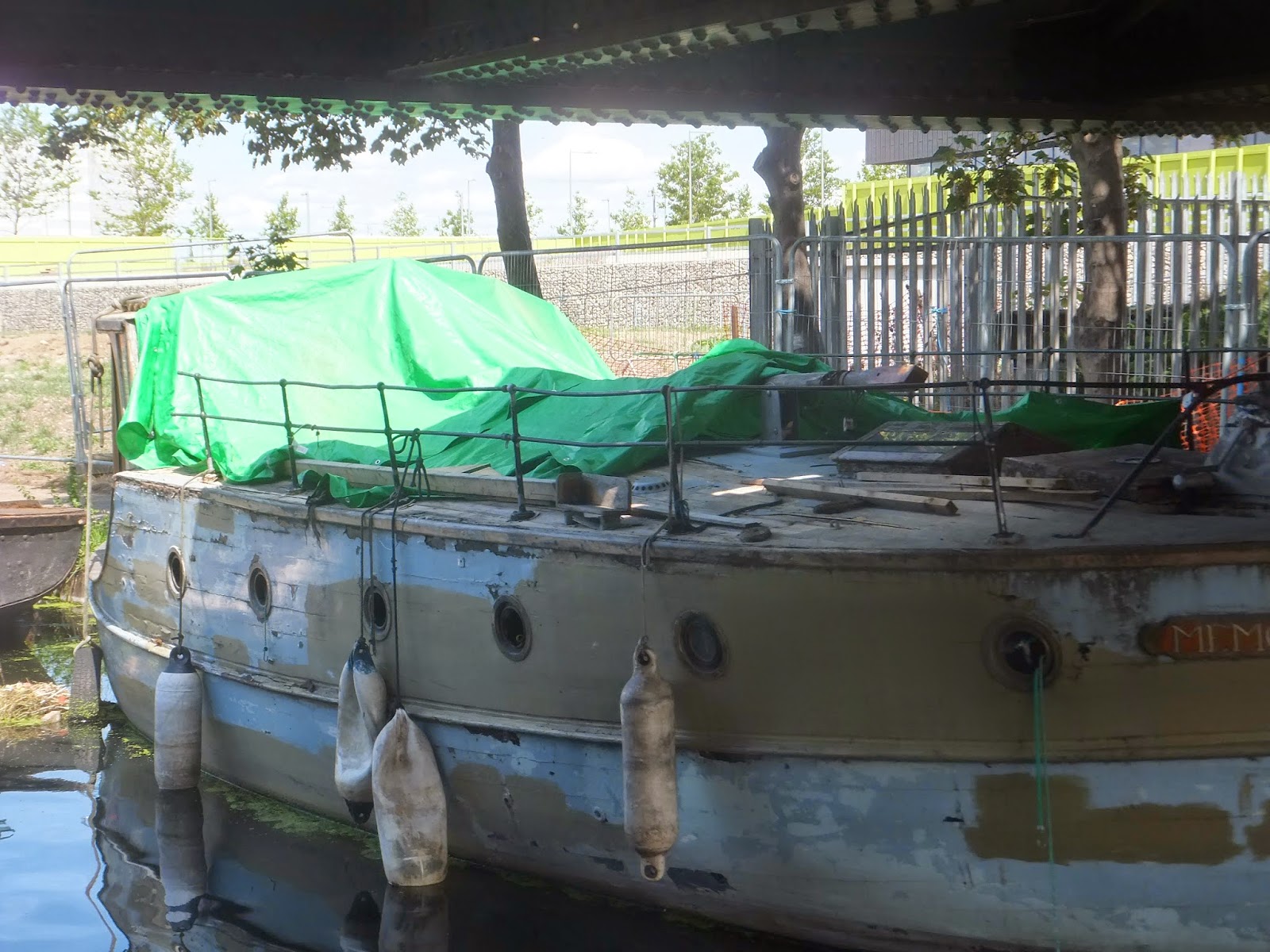 We followed Slow Pace through 8 locks and then pulled over just after Waltham Abbey – we are beside the Lee Valley White Water Centre where the Olympic canoe racing took place.  We will stop and have a look round on our way back.

These last photos are just a few more I took during the day. 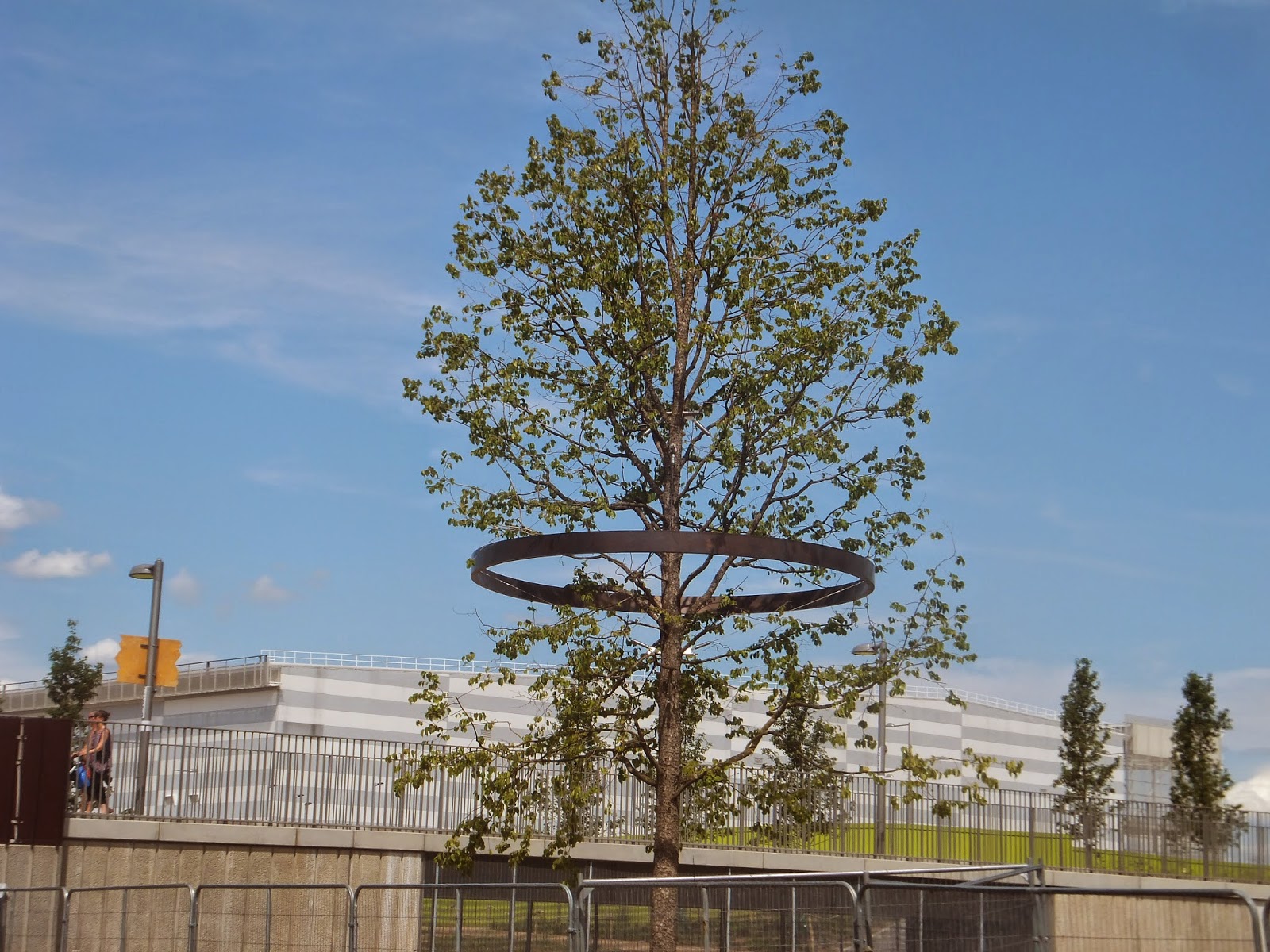 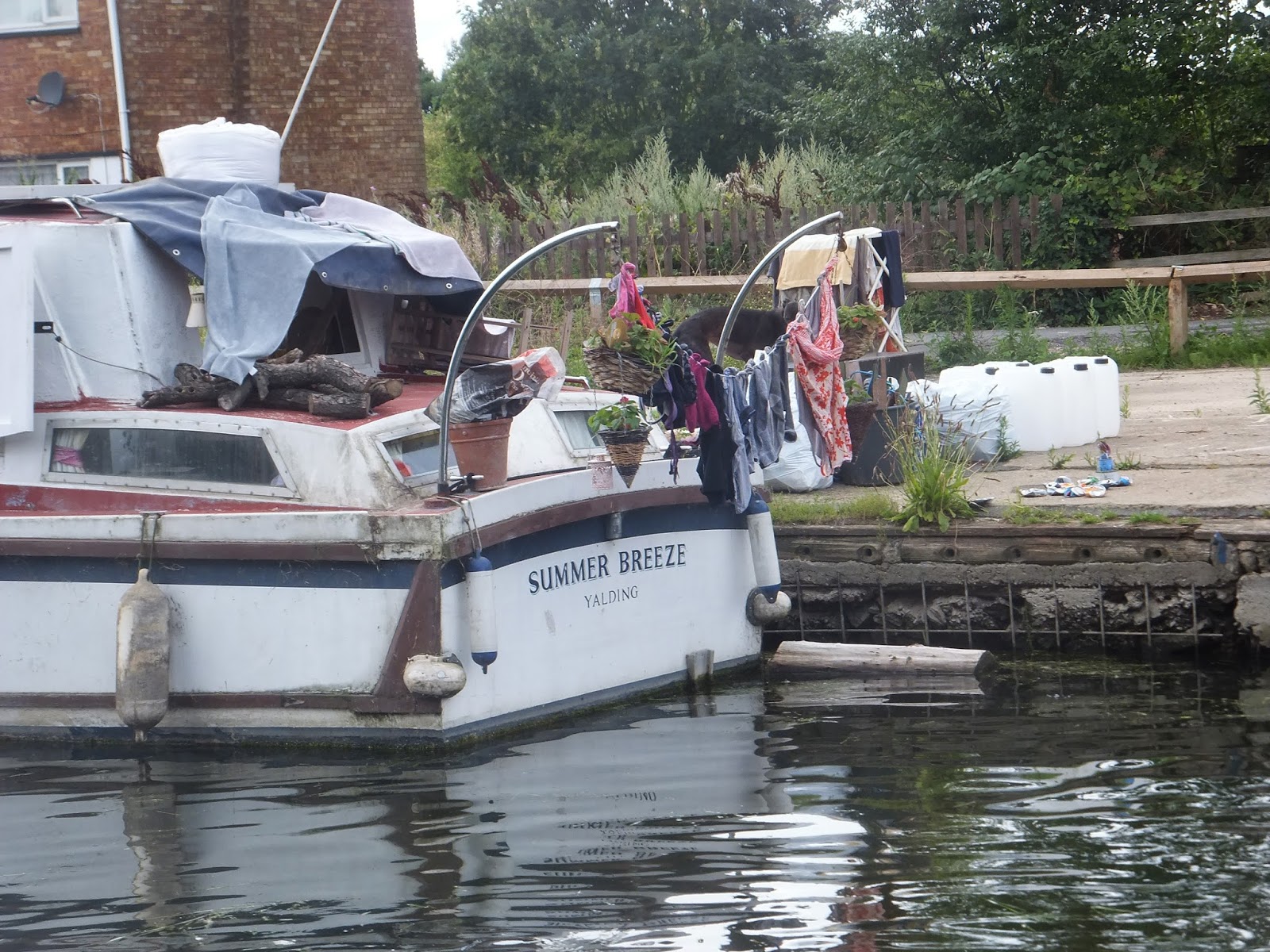 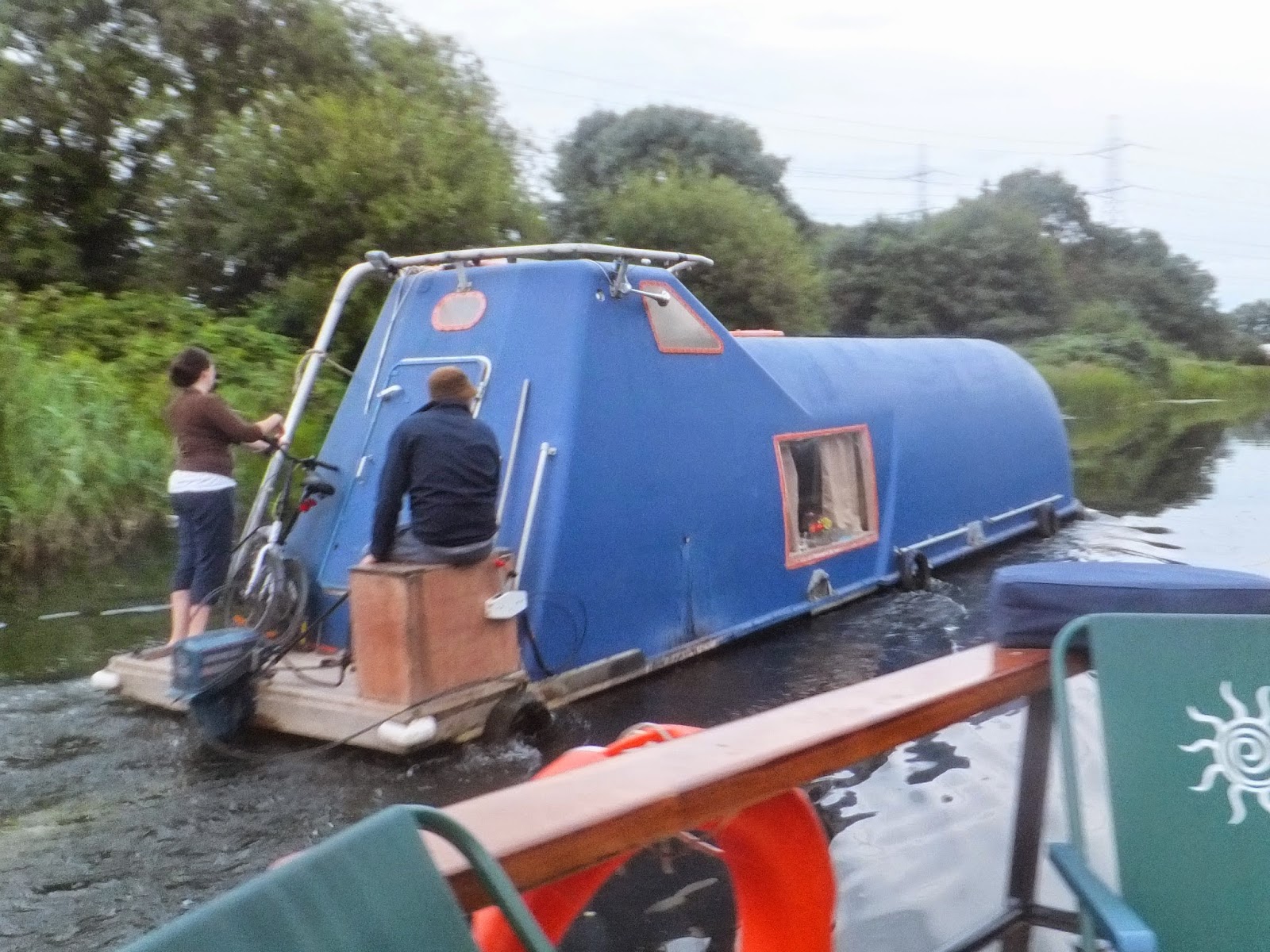 Posted by Linda Gifford-Hull at 10:25