We have finally left Guildford after a terrific thunderstorm last night.  I woke up about 2am and wasn’t too sure if I could hear thunder rolling in or if it was Richard snoring!!  We had gone to bed with the front doors open (we are reverse layout) as it was so hot.  I quickly jumped out of bed (well quickish – it was 2am!) and shut the doors.  Then it started lightening, thunder and very heavy rain.  It must have gone on for about half an hour.  Muffin didn’t seem to be too worried - he just lay beside me on the floor.
We were having more visitors today so moved down to Millmead again.  This time my step-mother, Suzanne, and her partner, Mike were coming.  They live in Farncombe but as we aren’t going down that way now they came to Guildford and we met them at the Brittania pub just by Millmead Lock.  After a very nice lunch we took them for a ride down to the Row Barge and back.  Boy was it hot but there has been just a slight breeze all day which has been a great relief.  They both seemed to really enjoy it especially as they saw Suzanne’s nephew’s house which backs onto the river!  We came up through Millmead Lock but both the mooring places above the lock were taken so Suzanne and Mike jumped ship at the lock and we went up to the Rowing Club to wind for the last time.  We then went down Millmead Lock AGAIN and finally left Guildford.


Just below Millmead Lock is an old mill.  Flour mills stood on this site from the early middle ages until 1894.  There was also a fulling mill here when Guildford was an important wool town.  In 1701 a water-powered pump was installed by the mills to provide the town with piped water.  The present building was erected in 1771 and the western extension added in the 1850s in an identical style.  After 1627, the mills were owned by the Poyle Charity Estate and the profits used for the poor of Guildford.
I have been visiting Guildford since I was a child for one reason or another.  We used to drive up the High Street and I have always loved the clock which sticks out over the road from the Guildhall.  The story goes that a London clock-maker, John Aylward, presented the clock to the Corporation of Guildford in return for freedom to trade in the borough.  The Guildhall was used in the 16th century as a court room and in the 17th century as a council chamber.  Guildford Corporation met in the upstairs council chamber until 1931. 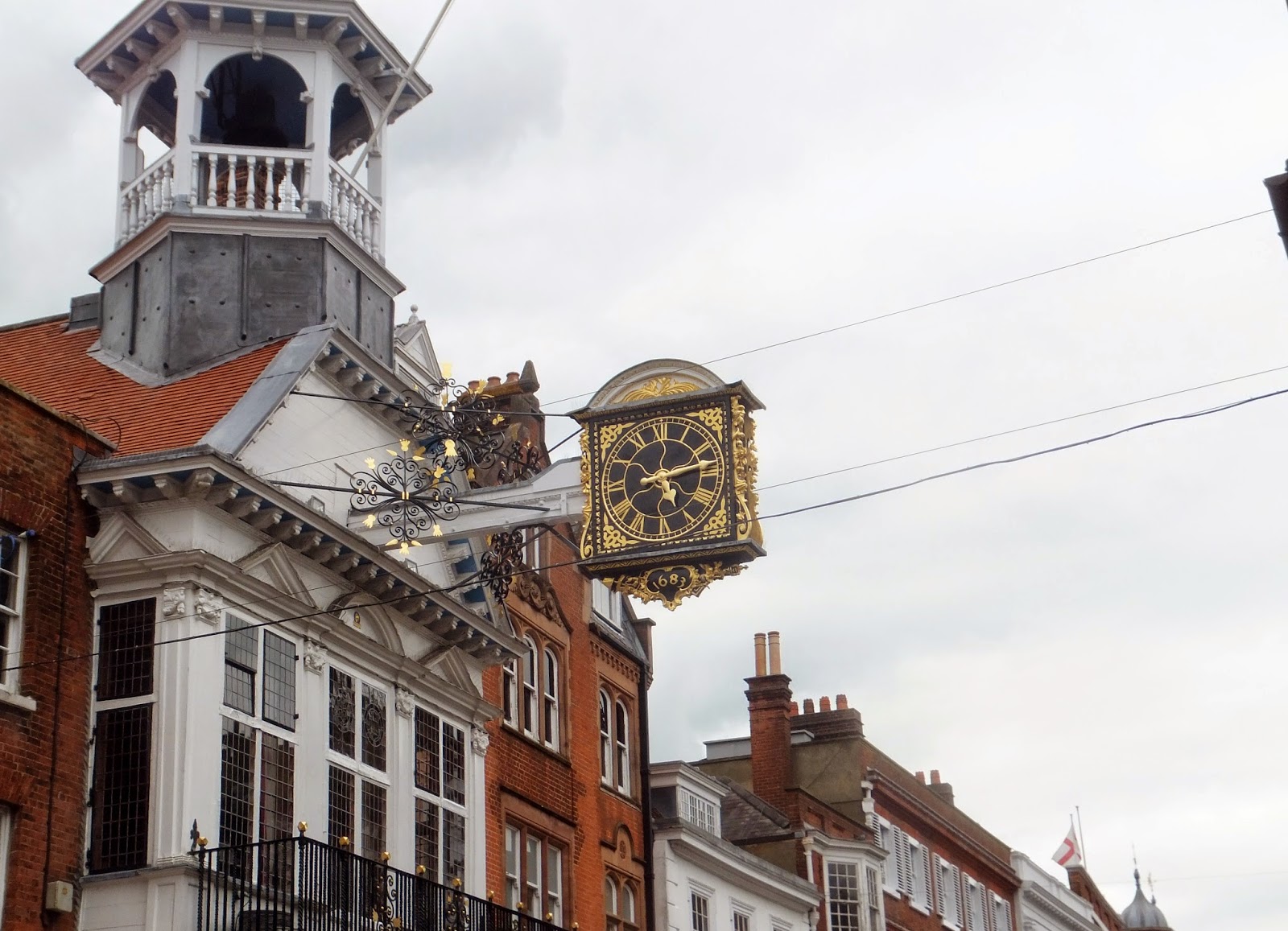