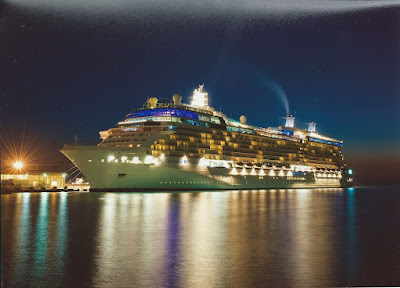 The route we took 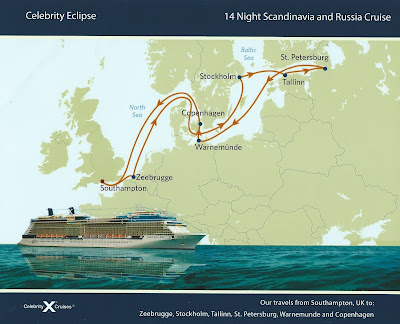 So where shall I start.  Let me go back a couple of years.  Lots of our friends have cruised and said that we should do it.  Neither Richard nor I like it when it is hot so that ruled out quite a few destinations so we decided that one day we would do a Baltic cruise.  Oh yes, and Richard was worried he would be bored!

Forward to 12 months ago when Penny and Jim said that they had booked a cruise to the Baltic.  Of course, I jumped in and said can we come!  We gave them thinking time and they came back that on the proviso that I didn't spend all my time blogging they would love us to join them.

We booked the cruise through The Cruise Specialists and even managed to get a cabin right next door to P & J - result!

Fast forward to May this year.  I started to panic that I wouldn't have the right clothes blah, blah, blah!!  This was our first cruise and even though we had gone through everything with a friend who had done the same cruise on the same ship last year, I was still anxious. However, all the tours were booked, the taxis were booked, all our paperwork was in order and I had got a long list of useful things to take which I had got from the Celebrity Cruise Addicts Facebook page.  It even had cable ties on it!  I had also joined Cruise Critics.

So the great day dawned and after a fiasco with the taxi company we arrived at Southampton.  My first view of Eclipse actually made me gasp!  We were going on that???  I had seen cruise ships from a distance but not that close. 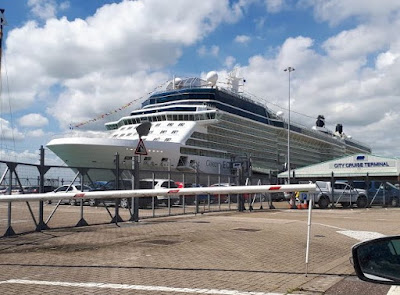 The queue was very long for check-in but eventually we were at the desk and getting our sea passes.  Through security and then the long haul up to the ship.  Champagne on arrival and then to our cabins (or state rooms as Celebrity like to call them).  I had seen photos of the cabins and certainly wasn't disappointed at all but the bathroom was much better than I expected.  We did a half unpack and then went exploring.

I can't say enough how amazing Eclipse is.  The Atrium is magnificent and definitely a wow factor.  At each turn there seemed to be another bar - could we sample them all?? 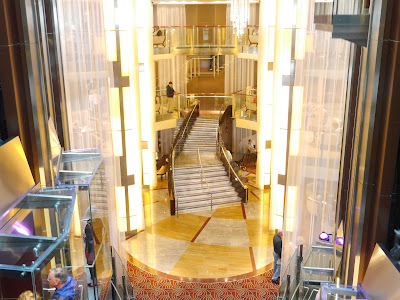 Our first dinner in the main dining room, the Moonlight Sonata Dining Room, was excellent.  We shared our table with four ladies - one of whom is a widow but the others had husbands which, for one reason or another, couldn't or wouldn’t travel.  This cruising is a regular occurrence.  Our waiter, Magzie, soon learnt our names and our fads!

We had planned to go to Brugges from Zeebrugge but I was having problems with my right knee and it had got worse over the weekend so I went to the ship's doctor who gave me some anti-inflammatories and told me to rest for a few days.  I was rather disappointed not to be getting off the ship but it was for the best.

We then had two days at sea to really get our bearings and wind down a bit.  One day would have been better as I wanted to get on with the sightseeing!

Stockholm It was the sail in to the city that was so amazing through the 30,000 islands and islets of the Stockholm Archipelago. 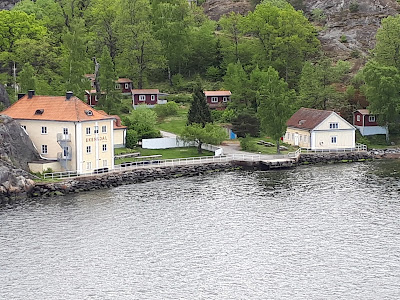 Stockholm itself was lovely.  Our first port of call was the Vasa Museum where we saw the remarkable ship Vasa who had sunk on her maiden voyage in 1628.  To see this complete ship that had sunk almost 400 years ago in one piece was awe inspiring. 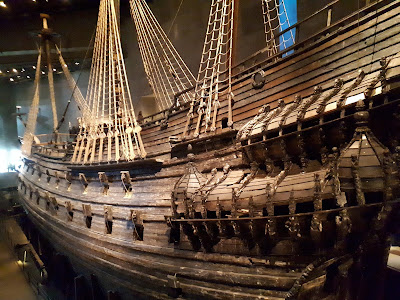 Stockholm city on the island of Gamla Stan was founded in 1252 so parts of it are very old.  Lovely cobbled narrow streets with lots of alleyways.  The main square was typically European if I dare say it!  However, each city that we visited has its own very unique square.

The guide we had in Stockholm wasn’t the best but we got to see everything that was on the list.  I would have liked to go into the Royal Palace but there just wasn’t time.

We watched the sail away from Stockholm in the Oceanview restaurant on the port side so that we could see the other side of the waterway.

Memories - The amazing sail in and sail out through the archipelago.  Vasa.  Big ice creams in the square!

Tallin.  Tallin had been on my bucket list for many years so I was really looking forward to seeing it and I wasn’t disappointed 😊  It is a city but very small.  1.3 million people compared with 2.2 million in Stockholm.  The residents of Tallin had it hard under the USSR and are now so happy to have their country back.  I felt that there was a certain bounce about the city!  Again, there wasn’t enough time as I would have liked to mooch a bit.  20 minutes free time wasn’t enough.

Memories - Seeing the roofs from the vantage point.  The old walls.  The Town Square. Catherine's Passage.  The fact that you can get so close to the President's Palace! 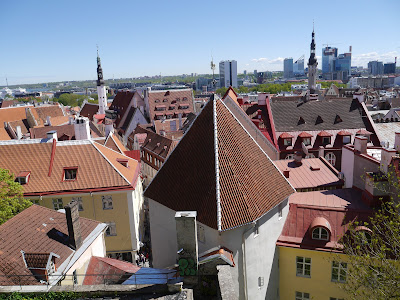 Our guide in Tallin was very good and obviously loved her home.

St. Petersburg!  I’m going to cover that in another blog.

We needed our sea day after five days of sightseeing and took the opportunity to stoke up our energy banks.

Warnemunde and Rostok.  We had decided not to go to Berlin from Warnemunde – 2 hours in a coach and then a whistle stop tour didn’t appeal to any of us.  However, I would like to visit Berlin one day.  The ferry ride up to Rostok was interesting and I’m glad we did it.  The town itself had been badly damaged in WWII but has been sympathetically restored.  The main square was much bigger than Stockholm and had a small market in it which we didn’t look at.  Our exploration of the tram and railway system back to Warnemunde worked well – we cheated a bit as the instructions on the ticket machines could be read in English!

I loved Warnemunde, it is a real seaside town (not a fish and chips and kiss me quick hat kind of place though!)  My knee was hurting again so I didn’t want to walk too much but would have loved to explore further.

Copenhagen. Copenhagen – what does the song say?  Wonderful, wonderful Copenhagen and it was.  Our tour really only scraped the tip of the iceberg – there looked to be so many places that we didn’t get to see.  I would have loved to have gone into the Tivoli Gardens and spend more time on the waterfront.  Also, there were alleyways which was screaming out to be explored. 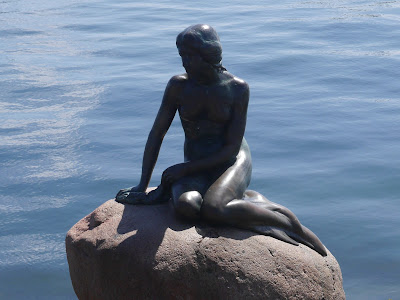 Memories - Seeing the Little Mermaid though I did originally think she was further out from the shore.  The four palaces that you can get so close to.  The Christiansborg Palace - really nice after the opulence of St. Petersburg

Two days at sea.  Originally I thought that two days would be too much but in the end it worked out well.  The trip to the Bridge was a real surprise and fascinating.

Richard is not really a city sort of person and St. Petersburg was really too much for him!  He did like the other destinations though.  On the other hand, I love travelling and visiting places and to do it on a cruise is wonderful.  I know I have said that we didn’t have enough time in some places but at least I got to see them as I doubt if I would have got to some of them in my lifetime.  A good night’s sleep on a lovely, big, comfy bed and then to wake up in another city – what could be better?

Where would I go back to?  Definitely Copenhagen - there is still so much more to explore. Tallin is small so I think we got to see most of it though one more day would be nice to wander around at our own pace.  Stockholm - maybe as I would have liked to see the Royal Palace.  I think we exhausted St. Petersburg

Eclipse – well what can I say about her.  She is a beautiful ship and her crew all seem proud to serve on her and to serve her passengers.  I spoke to quite a few people who have cruised with other cruise lines and 99% said that they thought Celebrity is the best and that Eclipse is the best ship.  Eclipse is one of four Solstice-class ships.  Solstice who entered service in 2008, Equinox in 2009, Eclipse in 2010 and Silhouette in 2011.

We covered a total of 3438 miles which equates to 3956 land miles - 4½ times the distance between Land’s End and John O Groats!

Cruising again – oh yes please!  In fact we have already booked our next one – Canada and North America in September 2018 on Celebrity Summit.  I can’t wait 😊

On our first chic night we had official photos taken - well you have to don't you?  Here they are. 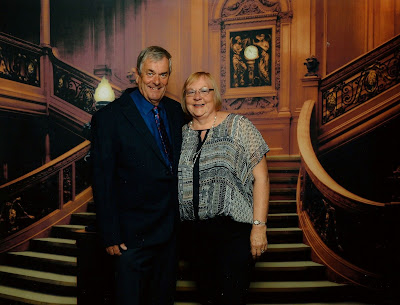 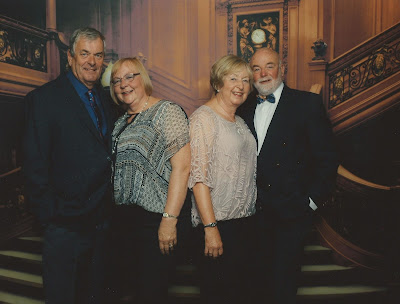 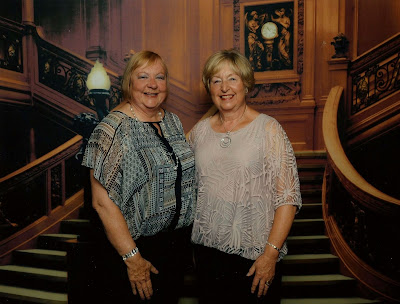 Posted by Linda Gifford-Hull at 12:56