Our Canadian Dream - The Journey

A typical Linda packing day – trying to get a quart into a pint pot!  I finally got it done with an hour to spare.  Our taxi was booked for 4.30pm and I was sitting in the arm chair waiting when he arrived.  It was a nice easy journey up to Heathrow and the driver dropped us off at Terminal 5 so that we could take advantage of BA’s twilight service of checking in bags for the next day’s flight.  This meant that we only had to go straight to security the next da

We took advantage of the Pods which were built take passengers from the long stay car park to Terminal 5, then it was extended to the Thistle Hotel.  It was £6 each but well worth it as it was so quick and easy.  We have used a travel agent, Travel Nation, to book the main elements of our trip so it was pure fluke that they had chosen that hotel. 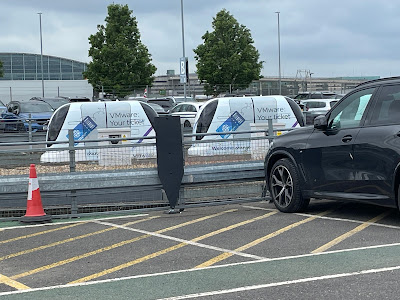 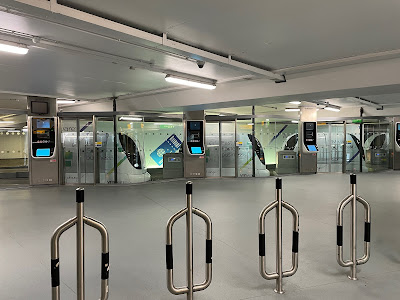 The pods are electric and autonomous. You tell the system where you want to go using touchscreens at the station. If a pod isn't waiting, one will arrive quickly (the average wait time is less than 10 seconds) and you're off. They travel along guideway tracks, navigating laterally using a laser at each wheel so they don't bump into the barriers. And they're in complete control of the journey; the central system programs the route and its relation to other pods before it sets off, but once the pod is under way it's 'thinking' for itself. There is a manned control room if you want to speak to someone or if something goes wrong, but ultimately you're pootling along in your own little capsule.

We checked into the hotel and went to our room before having dinner in their restaurant.  It was an OK meal but nothing special.

Early bed as we had an early start in the morning.

I was awake really early so we were up and down for breakfast by 7.30am.  Again we took the Pod to Terminal 5 and walked to security, which was a nightmare.  As usual I failed the scanner, but the security people gave up on me when I said that I had an articulate knee!  However, when our carry ons came out of the scanner one of them was taken aside.  We were told that it looked as if I had spent cartridge cases in there!  When checked it was my small camera tripod!!   For goodness sake what could I do with a spent cartridge case?  The departures lounge was as hectic as usual but we managed to find a couple of seats and sat waiting with a cup of coffee.  When our flight was called it was on C46 and as far as I could see C48 was the very last one   As we walked towards the gate I saw the word “transit” and thought that we would be bussed there, but oh no, it was a rapid transit vehicle, a short walk and we were faced with a huge Airbus 380 -  a double decker plane.  We had booked Premium Economy and were on the upper deck, along with Business Class and a few Economy seats. I was so glad we had booked Premium Economy as our seats were slightly wider and more comfortable and we had masses of leg room. 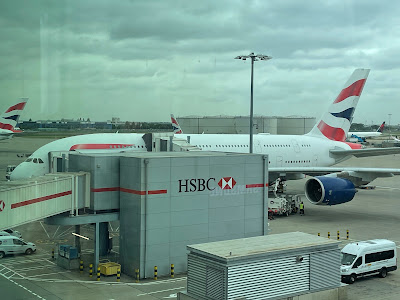 We took off on time and sat back and enjoyed the 7 hour and 20 minute flight.  I managed to watch all 6 episodes of Regency by Julian Fellowes.  Fortunately I had read the book not that long ago so when I kept dropping off to sleep it didn’t really matter!

We arrived in Boston about 10 minutes early – 13.25 EST (US) time.  We didn’t have to wait long to go through passport control (or whatever they call it these days!).  The lady asked what we were going to do in Boston – visiting family, tourism, business etc.  I said tourism and then suddenly changed it to visiting relatives as we were going to see my 2nd cousin who I had found through Ancestry 😃

We collected our bags and went to walk out of the customs hall, but we we were pulled over!  I had visions of having to unpack everything but the customs officer asked if I had any food items to which I replied that I had chilli flakes and onion granules!  He waved us through and wished us a nice day!

With so much baggage (well we are away for 6 weeks) we needed a good sized taxi and fortunately the first in line was an SUV.  The drive to the hotel seemed to be mostly underground – why can’t we do that in the UK?

We were staying at the Boston Marriott Copley Square hotel and our room was on the 38th floor, the top floor!  We had an amazing view of Boston. 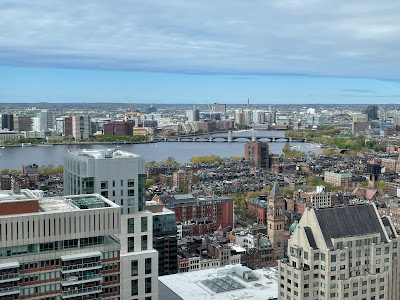 We had about an hour’s sleep then went for a walk down to the Charles River.  They have built a 3 mile long, 64 acre park on the Boston side of the river which is used by fitness freaks and people like us, out for a stroll. 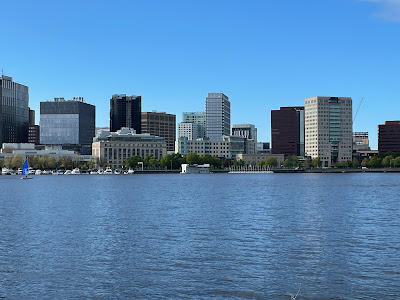 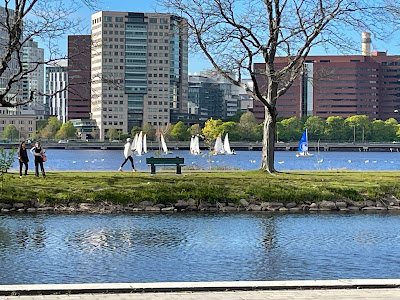 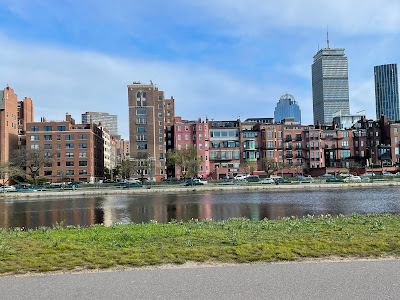 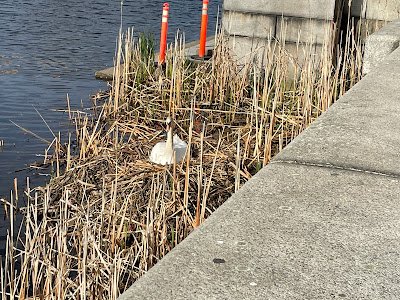 On our way back to the hotel we stopped at California Pizza, but sadly it wasn’t a good meal at all 😞

The view from our room at night. 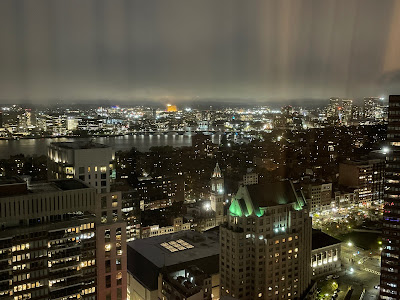 We managed to stay awake until 8.45pm .  Then CALAMITY struck!!  I suffer from Sleep Apnoea and use a CPAP machine, only it wouldn’t work.  We tried everything, but nope it was having none of it.  I settled down to sleep knowing that it was not going to be the best of nights.

Posted by Linda Gifford-Hull at 00:34