After a pretty rotten night we were up fairly early and down for breakfast in the Yard House, the restaurant attached to the hotel, by 8.30am.

We had arranged to meet my new cousin, Sandy, and her husband Joe in the Yard House.  Sandy and I seemed to hit it off immediately we discovered each other and nothing had changed when we met in person 😍  Sandy’s Grandfather and my Grandmother were brother and sister, which makes us second cousins.  Strangely enough I have found two other second cousins, also related through their grandfathers, one of whom lives in San Francisco and the other in Adelaide.  Maybe we can all get together some time!!

Sandy was a real star and managed to source a new power pack for my CPAP machine which needed to be picked up before 6pm.

We all had tickets for the ‘hop on hop off trolley bus’ and the nearest stop was just outside the hotel.  We decided to go round the route once and then go back to places that stood out.  We first drove down between the Public Garden and Boston Common.  The Public Garden was originally the first public botanical garden in America and was established in 1837.  In 1634 Boston Common was created as America’s first public park and was a site for Puritanical punishments, home to a whipping post, pillory and stocks.  Pirates, murderers and witches were hanged from a tree known as “The Great Elm”.  More than 1000 bodies have been unearthed there!  We passed the State House, sadly surrounded by scaffolding, and down to the Seaport District.  By this time it was cold and foggy and not very pleasant.  We went up to the USS Constitution which is the World’s oldest commissioned warship afloat and America’s Ship of State.  USS Constitution is noted for her actions during the War of 1812 against the United Kingdom, when she captured numerous merchant ships and defeated five smaller British warships.  She was launched 1797. 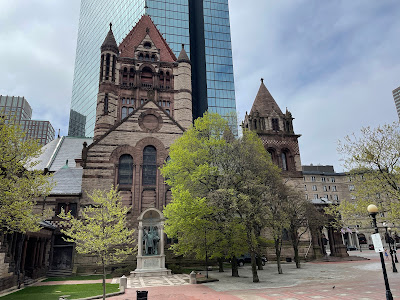 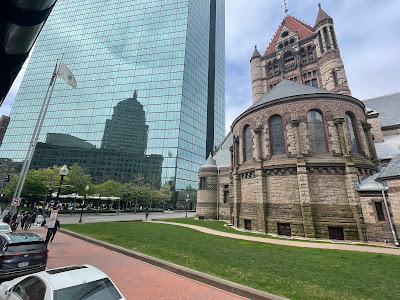 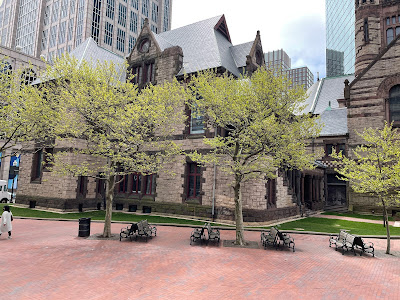 Having said that we would go round the route once we decided to get off at stop 8 which is right outside the Cheers Bar, the exterior of which was used in the hit NBC sitcom Cheers, which ran between 1982 and 1993.  We had a quick coffee in Starbucks then walked up the hill to look at the State House which sadly is under scaffolding, so we couldn’t see much.  We jumped back on the trolley bus and rode round to the Waterfront – passing the place where the Boston Tea Party happened. The Boston Tea Party was an American political and mercantile protest by the Sons of Liberty on December 16th 1773.  The target was the Tea Act of May 10th 1773, which allowed the British East India Company to sell tea from China in American colonies without paying taxes. Protesters, some disguised as American Indians, destroyed an entire shipment of tea sent by the East India Company. The demonstrators boarded the ships and threw the chests of tea into the Boston Harbour. The British government responded harshly, and the episode escalated into the American Revolution. 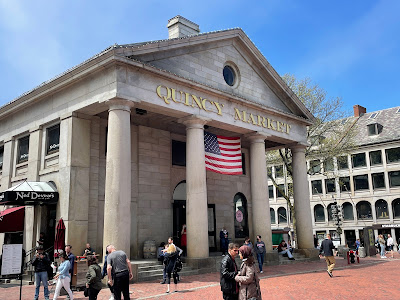 We were ready for lunch so wandered through Quincy Market where there were so many different types of food that we couldn’t make up our minds so ended up in the Hard Rock Café!  We wanted to go into Faneuil Hall but it was closed which was a shame.  From there we walked and had a look at the outside of the Old State House, built in 1713, before walking to Paul Revere’s house.  You may ask who was Paul Revere?  I had never heard of him, but he is a hero to the Americans.  On April 18th 1775, he made the most famous ride of his life, in the middle of the night, to Lexington Concord, to warn patriot leaders in hiding there.  Revere’s house was built in about 1680 on the site of a former parsonage which was destroyed in the Great Fire of 1676. A large and fashionable new home was built at the same location about four years later. Paul Revere purchased the house in 1770. 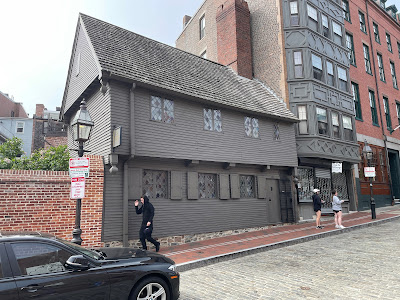 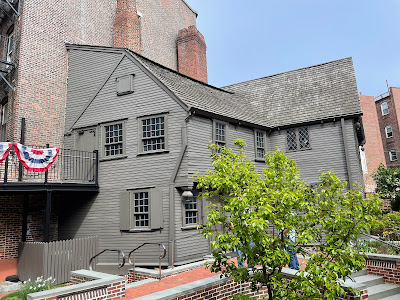 We then realised that we needed to get back to the hotel so that we could pick up the car and go and collect the new power pack for my CPAP machine.  We hot footed it to the nearest trolley bus stop and continued on the route back to the hotel.  As we got off the bus Sandy and Joe ran back to their car, leaving us oldies behind (!!) and drove to Castletown, they made it with minutes to spare!  I can’t thank Sandy and Joe enough for doing this as the whole holiday could have been spoilt as I would have had little sleep.

Richard and I managed to make it to 9.30 before going to sleep 😴

I had a good night’s sleep, the new power pack worked a treat.

Richard and I had breakfast in the Yard House again before being picked up by Sandy and Joe to go out of the city.

Our first port of call was Lexington where the American Revolutionary War (1775-1783) started. 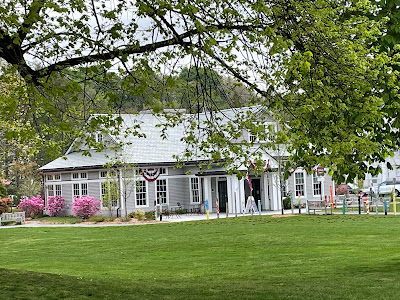 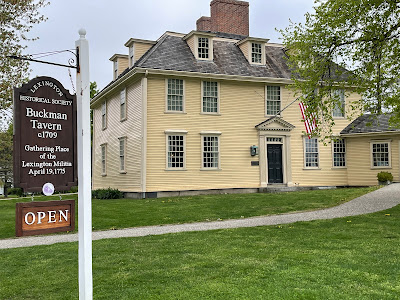 We learned a lot about the War when we visited the Minuteman National Park Visitor Centre and saw a great video. Tensions had been building for many years between residents of the 13 American colonies and the British authorities, particularly in Massachusetts. On the night of April 18th 1775, hundreds of British troops marched from Boston to nearby Concord in order to seize an arms cache. Paul Revere and other riders sounded the alarm, and colonial militiamen began mobilising to intercept the Redcoat column.

American colonies and the British authorities, particularly in Massachusetts. On the night of April 18th 1775, hundreds of British troops marched from Boston to nearby Concord in order to seize an arms cache. Paul Revere and other riders sounded the alarm, and colonial militiamen began mobilising to intercept the Redcoat column.

On April 19th British troops march into the small town of Lexington at about 5:00 a.m. to find themselves faced by a militia company of more 70 men led by Capt. John Parker. When the vanguard of the British force rushes toward them across the town green, Parker immediately orders his company to disperse. At some point a shot rings out—historians still debate who fired it—and the nervous British soldiers fire a volley, killing seven and mortally wounding one of the retreating militiamen. The British column moves on toward Concord, leaving the dead, wounded, and dying in their wake.

Arriving in Concord at approximately 8:00 a.m., British commanders Francis Smith and John Pitcairn order several companies, about 220 troops in all, to secure the North Bridge across the Concord River and then continue on another mile to the Barrett Farm, where a cache of arms and powder is presumably located. A growing assembly of close to 400 militia from Concord and the surrounding towns gather on the high ground, where they see smoke rising from Concord. Mistakenly assuming the Redcoats are torching the town, the militia companies advance. The Acton Company, commanded by 30-year-old Capt. Isaac Davis, is at the head of the column. When asked if his men are prepared to confront the British troops, Davis says, “I haven’t a man afraid to go.” 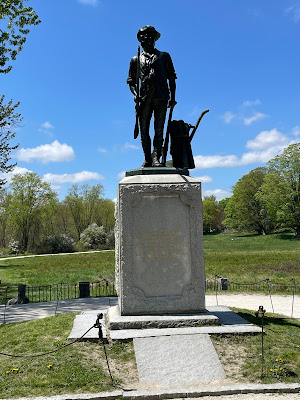 As the Minute Men march down the hill, the British soldiers, intimidated by their numbers and orderly advance, retreat to the opposite shore and prepare to defend themselves. When Davis’s company comes within range, the Redcoats open fire, killing Davis and also Abner Hosmer, another Acton Minute Man. Major Buttrick of Concord shouts, “For God’s sake, fire!” and the Minute Men respond, killing three British soldiers and wounding nine others. This volley is considered “the shot heard round the world” and sends the British troops retreating back to town.

Many more battles followed, and in 1783 the colonists formally won their independence.

What was a Minute Man?  Well Minutemen were members of the organised New England colonial militia companies trained in weaponry, tactics, and military strategies, comprising the American colonial partisan militia during the American Revolutionary War. They were known for being ready at a minute's notice, hence the name.

We had coffee in Concord, a very pretty little town. 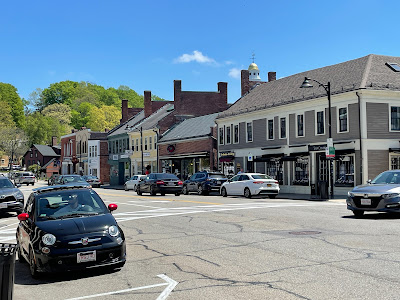 From there we drove on to Salem which is best known for the witch trials of1692.  More than 200 people were accused of practising witchcraft and ultimately 20 innocent people, 14 women and 5 men were hanged and one man was pressed to death.  The trials ceased when Governor William Phipps disbanded the court after his wife was accused of being a witch!  We walked round the memorial garden where there are stones sticking out with each person’s name carved in it.  We walked round to the Museum but it was quite expensive to get in and, to be honest, we hadn’t really got time to visit it. 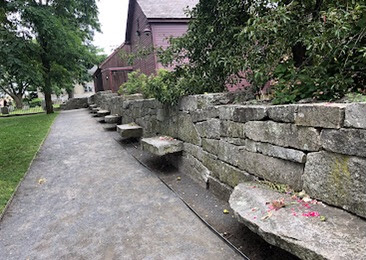 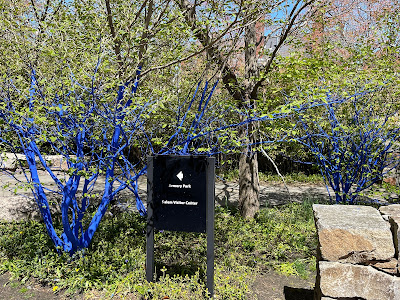 Our next and final stop was in Rockport.  A pretty seaside town in the old New England style.  We wandered around, stopping off in shops (I didn’t buy anything!) before having a meal in a fish restaurant.  I had shrimp (prawns) and fries (chips), they were the best chips I have ever had. 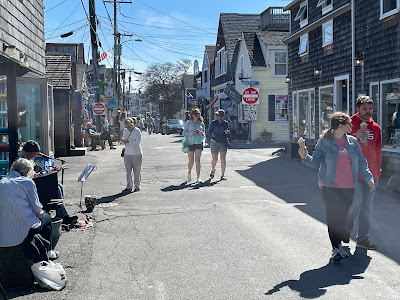 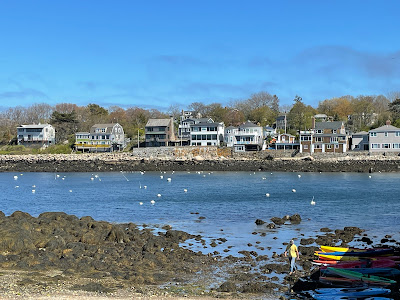 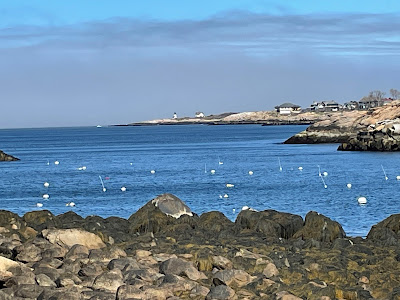 This is probably the most famous place in Rockport.  It is a classic fishing hut called Motif Number 1. 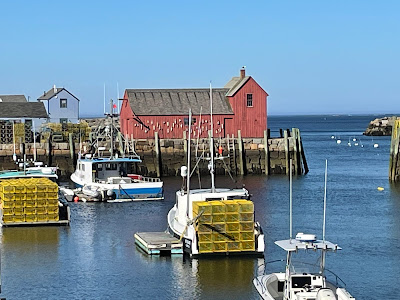 We then drove back into Boston and said a sad farewell to Sandy and Joe.  They are such lovely people and couldn’t do enough for us.  We really enjoyed both our days with them and look forward to welcoming them to the UK in the future. 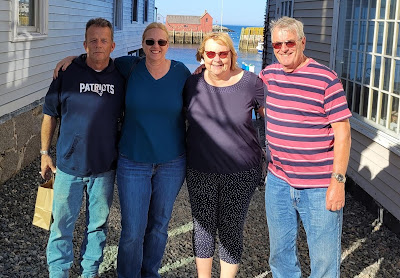 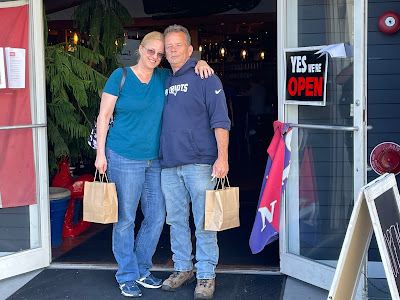 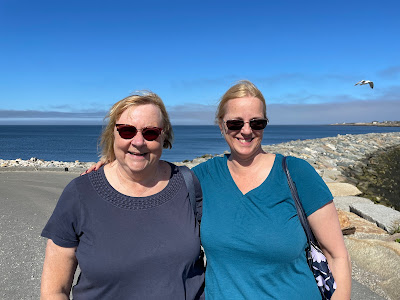 Not the most flattering photo of either of us - I blame the photographer!

Once back in our room I had the packing to do, which wasn’t too bad this time.  Early night as we had an early start the next day.

Posted by Linda Gifford-Hull at 15:45