Another early start but we have worked out that if we want a decent mooring place on the Thames then we need to start early and finish early.

Before we got to Henley lock, which was just around the corner, we saw a house that had been on Grand Designs.  I remember the plot being very narrow and that the neighbours were far from happy as it was so out of place.  What do you think? 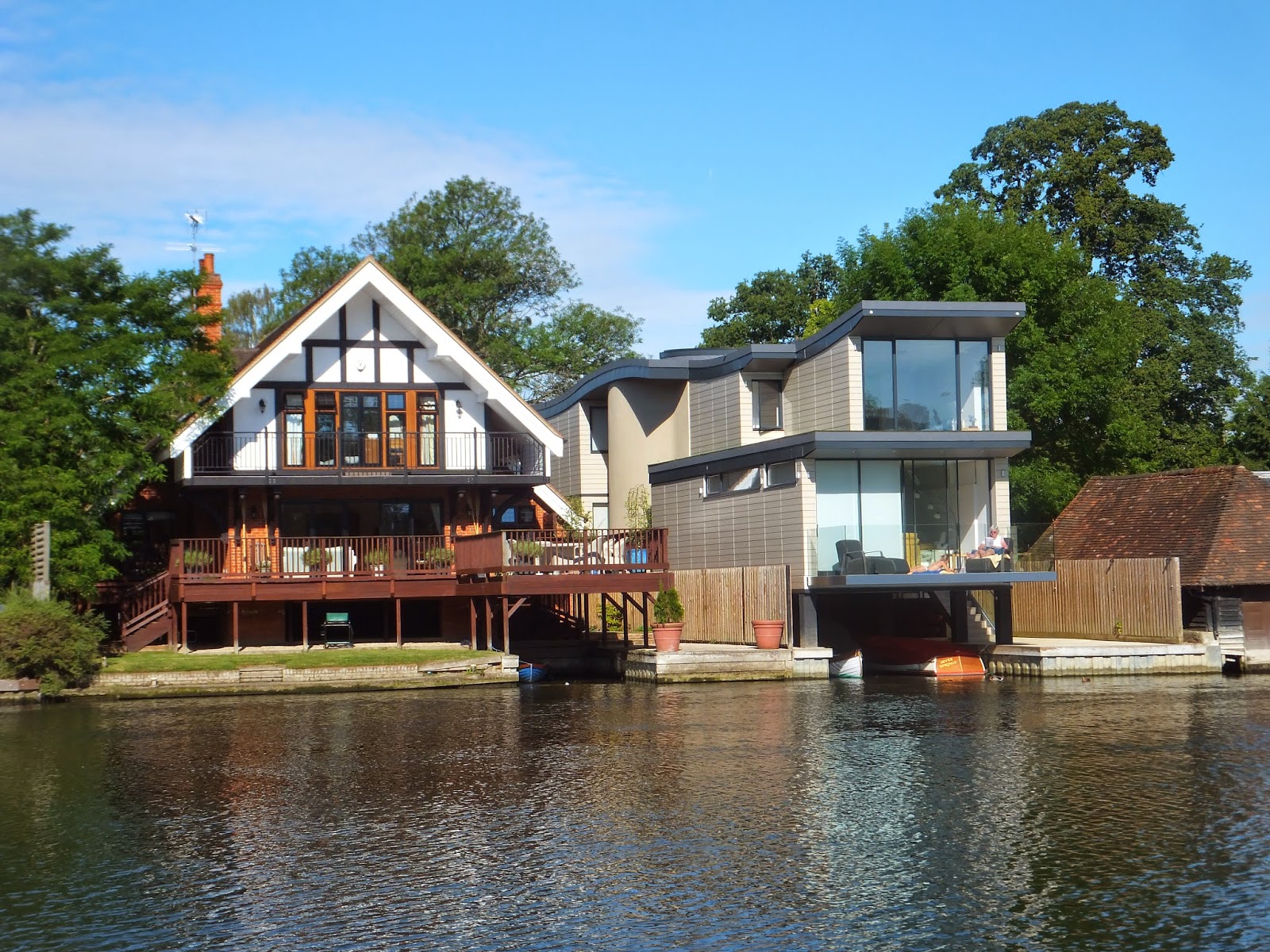 As we came into Henley we saw this house for sale with Hamptons.  The agent’s blurb says “WATERSIDE - Monaco arguably holds one of Henley's finest and iconic views. Positioned at the end of Rod Eyot, on the Henley Reach, Monaco enjoys stunning views downstream . Available for the first time in 30 years, this charming property has much to offer and was completely renovated in 2004. From the mainland, access to Monaco is by boat, and within minutes one steps on to the delightful gardens that are laid to lawn and bordered by beautiful flower beds filled with many varieties of roses. From the decked terrace, steps up lead to the front door and one enters into the open plan kitchen/breakfast/sitting room which has double doors and steps down to the garden. There are three bedrooms within the property as well as a shower room. Wifi and wooden floors are found throughout. There is approximately 280ft of mooring on both sides of its banks.”  £899,950.  Nowhere does it mention that it looks as if it is made of wood and what about flooding?? 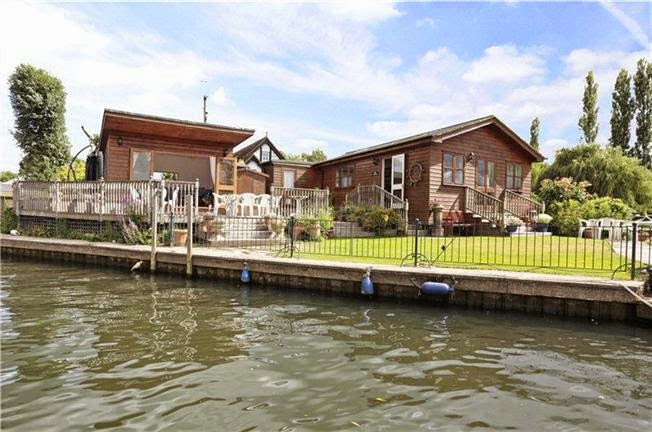 After Henley the locks were all very busy with boats, mainly vintage on private hire, coming up river.  We shared Hamebledon Lock with Windsor Belle, a 1901 steam launch.  She is just perfect with not a scratch on her – I was terrified that our big steel vessel might just touch her!  Windsor Belle was built and owned by Arthur Jacobs of Windsor in 1901and started out life as a steam launch but was converted to motor drive in 1950.  In 1986 Peter Freebody restored her and put a steam engine back in.  She is now owned by the Culden Faw Estate (which was formed by the amalgamation of Culham Estate, Hambleden Estate and the deer park at Henley Park, Fawley) and is available for private hire. 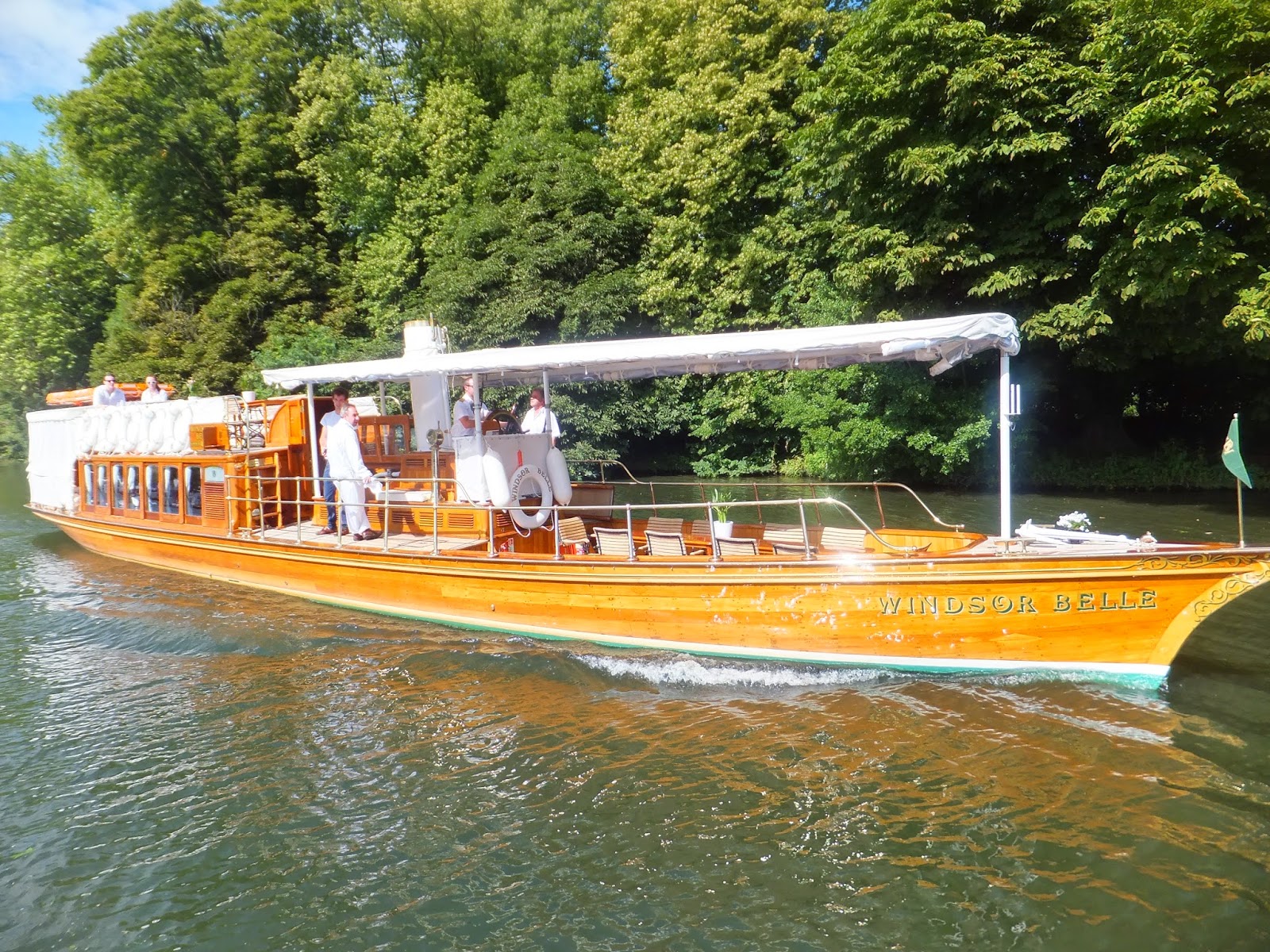 The next lock was Hurley and strangely enough there was another steam launch, the Alaska, waiting to come into the lock.  She is even older than the Windsor Belle having been built in 1883. She is oldest Working Steamer on the Thames.  She is part of the national Historic Fleet Along with Famous ships such as HMS Victory and the Cutty Sark!

Alaska has a wonderful history and I’m going to share it with you.

“Alaska was built in 1883 at Bourne End by W. and J.S. Horsham and Co. probably as a private launch, although she was used exclusively by Horsham’s as a hire boat to take parties on day trips from Bourne End Wharf. She was subsequently purchased by Salter Brothers of Oxford in 1887. In 1888 Salters used 'Alaska' to inaugurate their famous Oxford to Kingston service. This trip took 2 days going down to Kingston and 3 days for the return leg to Oxford. Passengers stayed in boarding houses and hotels along the route and the fare for the trip, excluding accommodation was one pound ten shillings (£1.50). Up until WWII, 'Alaska' plied this route, gradually being relegated to shorter portions as more vessels were built to cope with demand. She was also used for parties and private functions much as she is today. At the outbreak of war the boat was sold to Jackson Brothers of Putney and served time as a guard boat but was then sold to Mears of Twickenham who used her for trips between Richmond and Teddington. Apparently the skipper during this period attempted to procure tips from the passengers by telling them that the boat had been to Dunkirk, which is completely untrue but probably had the desired effect! With her engine removed at Kingston, 'Alaska' was then 'poled' with a punt pole all the way up-river to Oxford. She was pressed into service as a Scout hut but the enterprising Boy Scouts chopped up the wooden superstructure and sold it as fire wood in order to raise funds for a new hut! When she was rediscovered in 1974 at Medley Boat Station in Oxford she was sat on the bottom, decked over with plywood and filled with concrete being used as a boarding pontoon for hire boats. 'Alaska' was brought down river wrapped in plastic sheeting with an outboard motor attached and then spent 12 years in Peter Freebody's boatyard at Hurley, being restored to her former glory. She was reunited with her original engine and fitted with a new boiler and finally relaunched in 1987.”

I didn’t get chance to take a photo so I’ve borrowed one from Google.

At Marlow Lock we were waiting for the lock on a grating pontoon – I just happened to look down and saw a coot sitting on her nest – what a strange place! 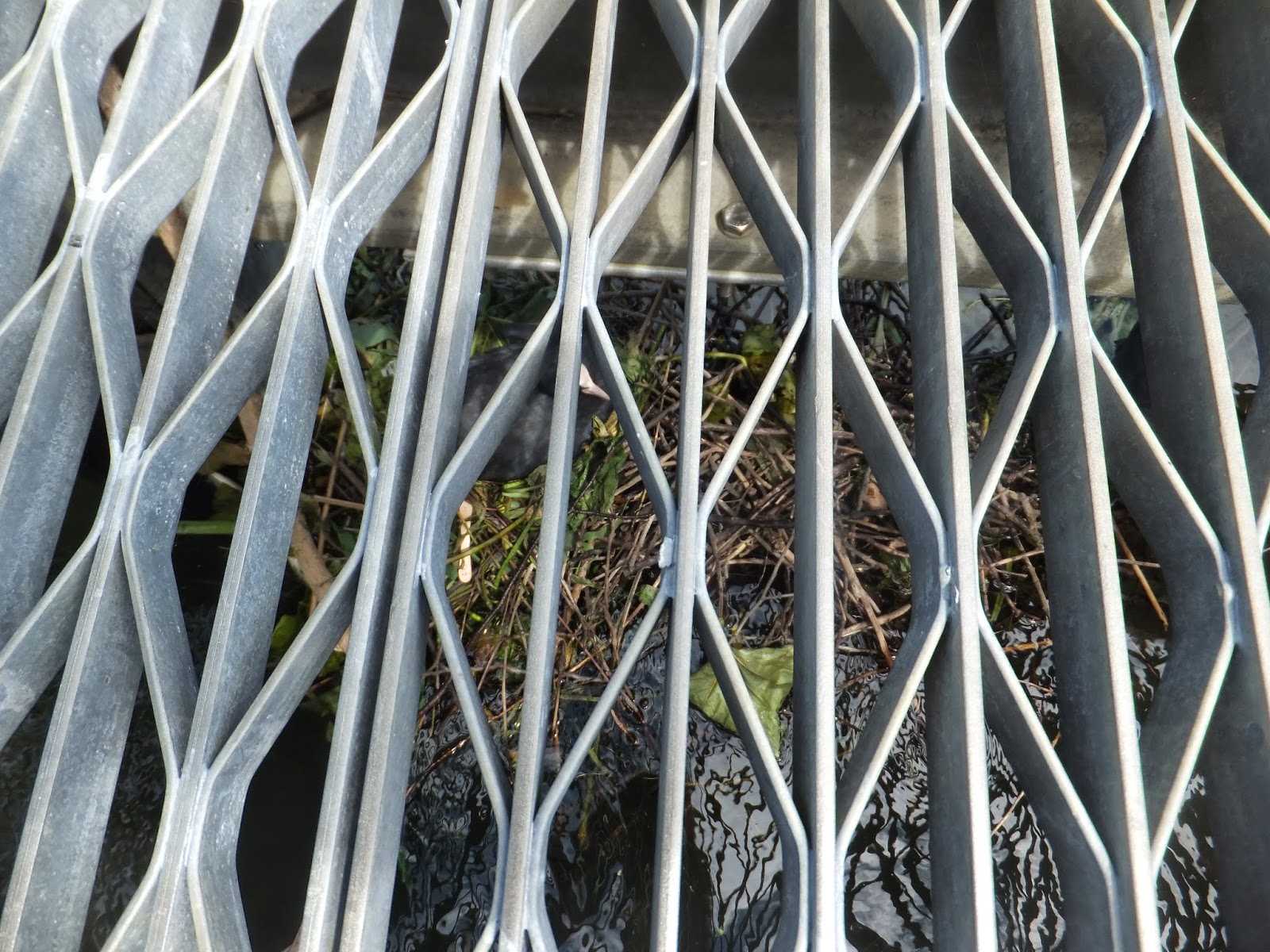 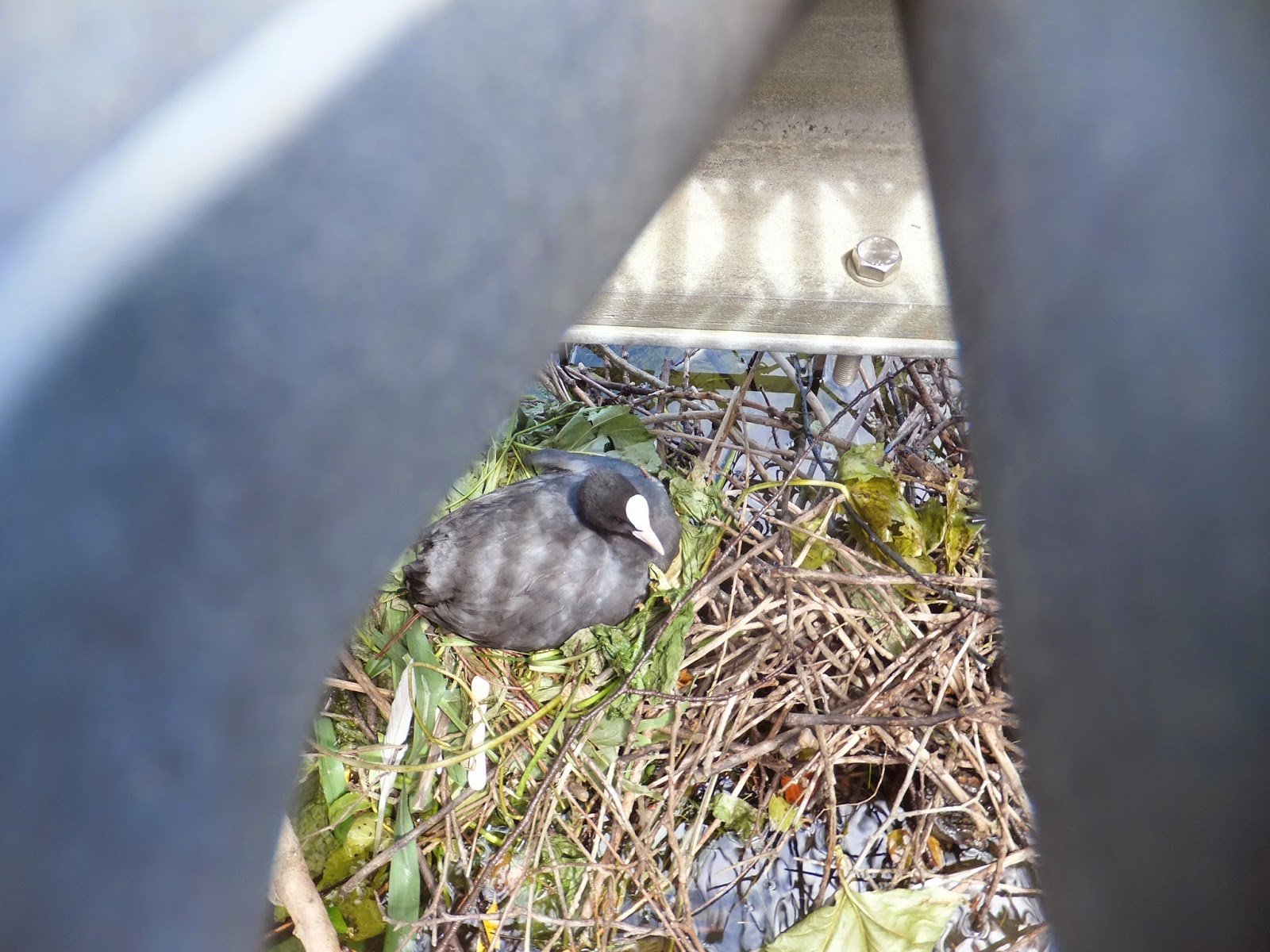 In Marlow Lock I noticed that the grass isn’t quite what it appears to be!  If it wasn’t for the join you would never know!! 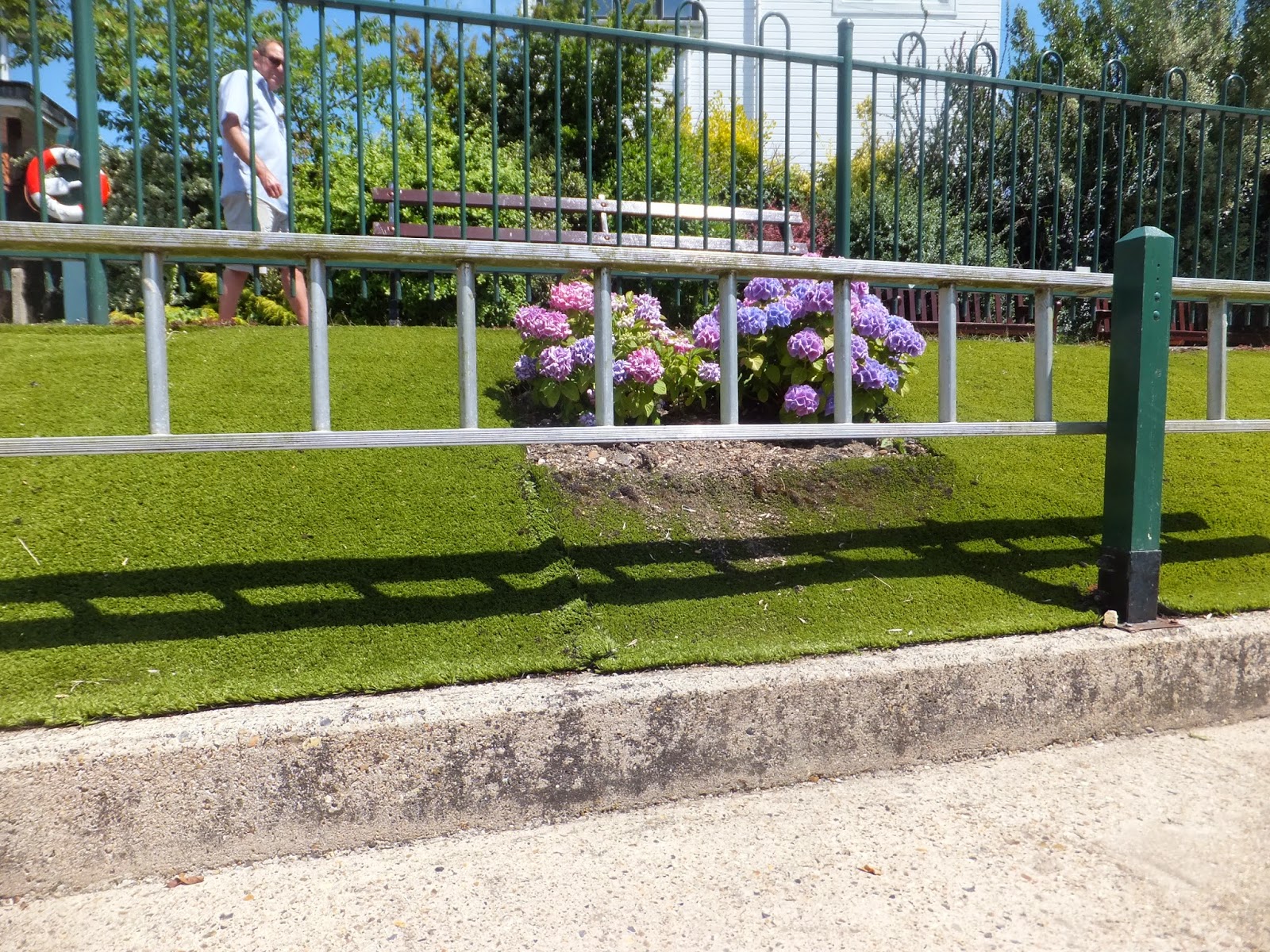 As we came under Bourne End bridge we held our breath to see if there was space on Cookham Meadow – and there was!  We moored up and relaxed in the sunshine.