I’m beginning to feel more human in the mornings again!!
We set off before 10am to Hertford.  We had Hardman’s Lock to do again then up into Ware.  There is a lovely town bridge with a weeping willow beside it and flowers on the railings, though they are facing inwards.  Then we passed the gazebos and apparently there is nowhere else in Britain where you can find so many gazebos along a single riverside.  Their origins can be traced back to their construction in the 18th and early 19th centuries, with a few dating from even earlier, in the late 1600s. They were built by innkeepers and other owners of property on the high street, and were intended as a means of finding some peace and quiet away from their hectic lives in town.  Over time the gazebos became in need of repair, with some of them sadly not surviving to be seen today. In the 1830s there were 25 gazebos, but by 1980, only ten remained.  Fortunately, during the 1980s the East Herts District Council stepped in and, with additional funds provided by the Ware Society and others, they set about restoring the gazebos to their former glory. 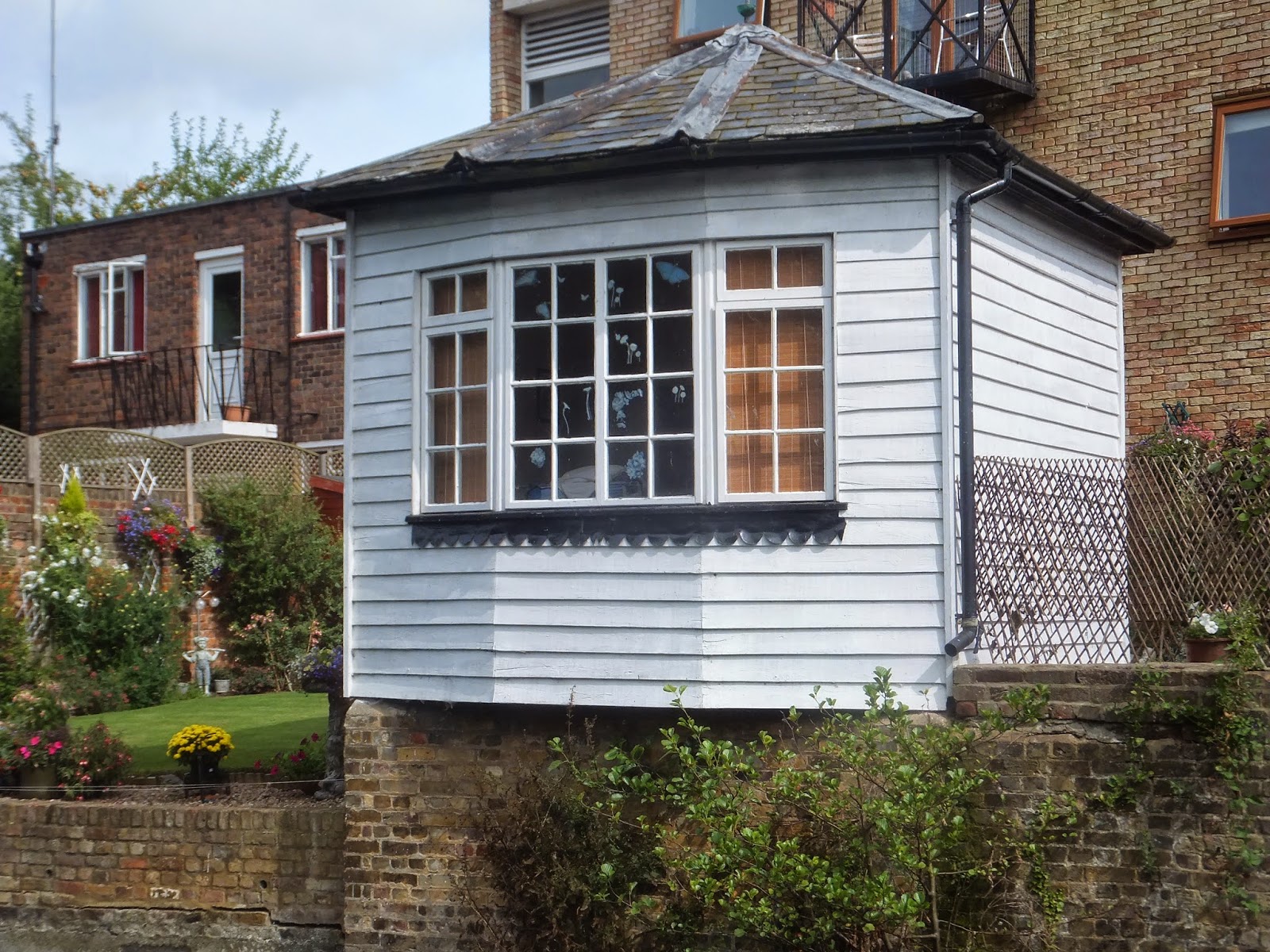 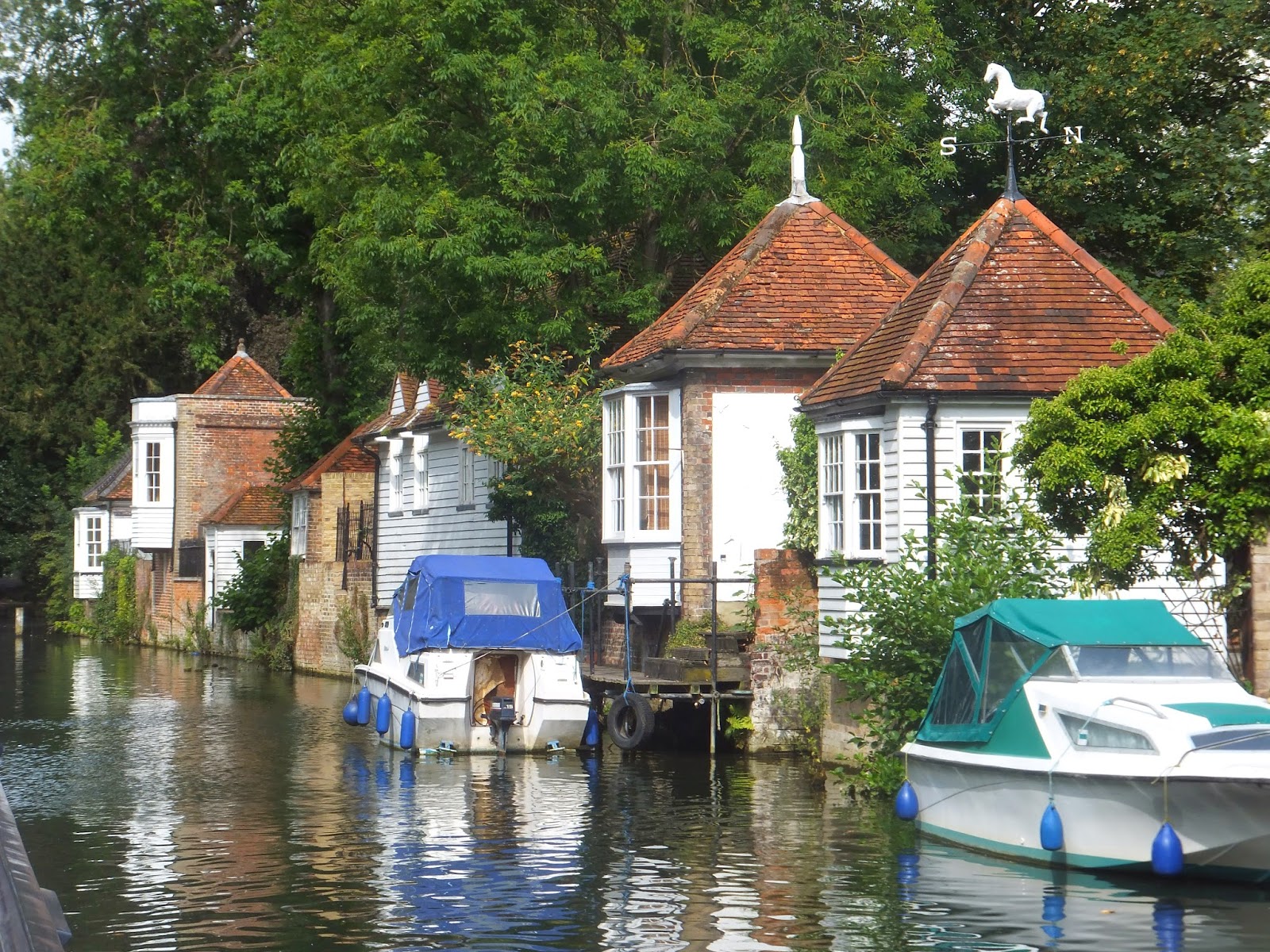 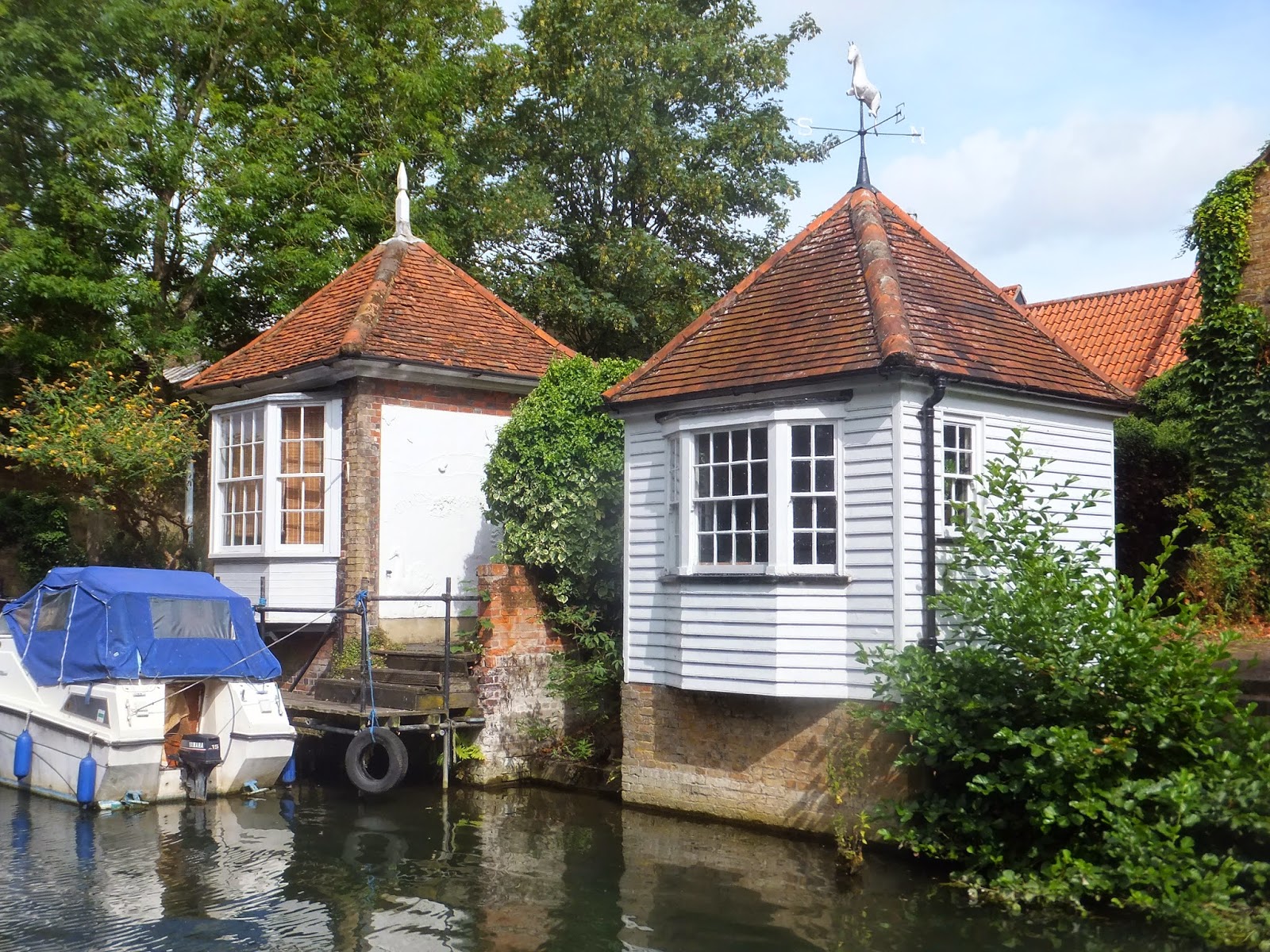 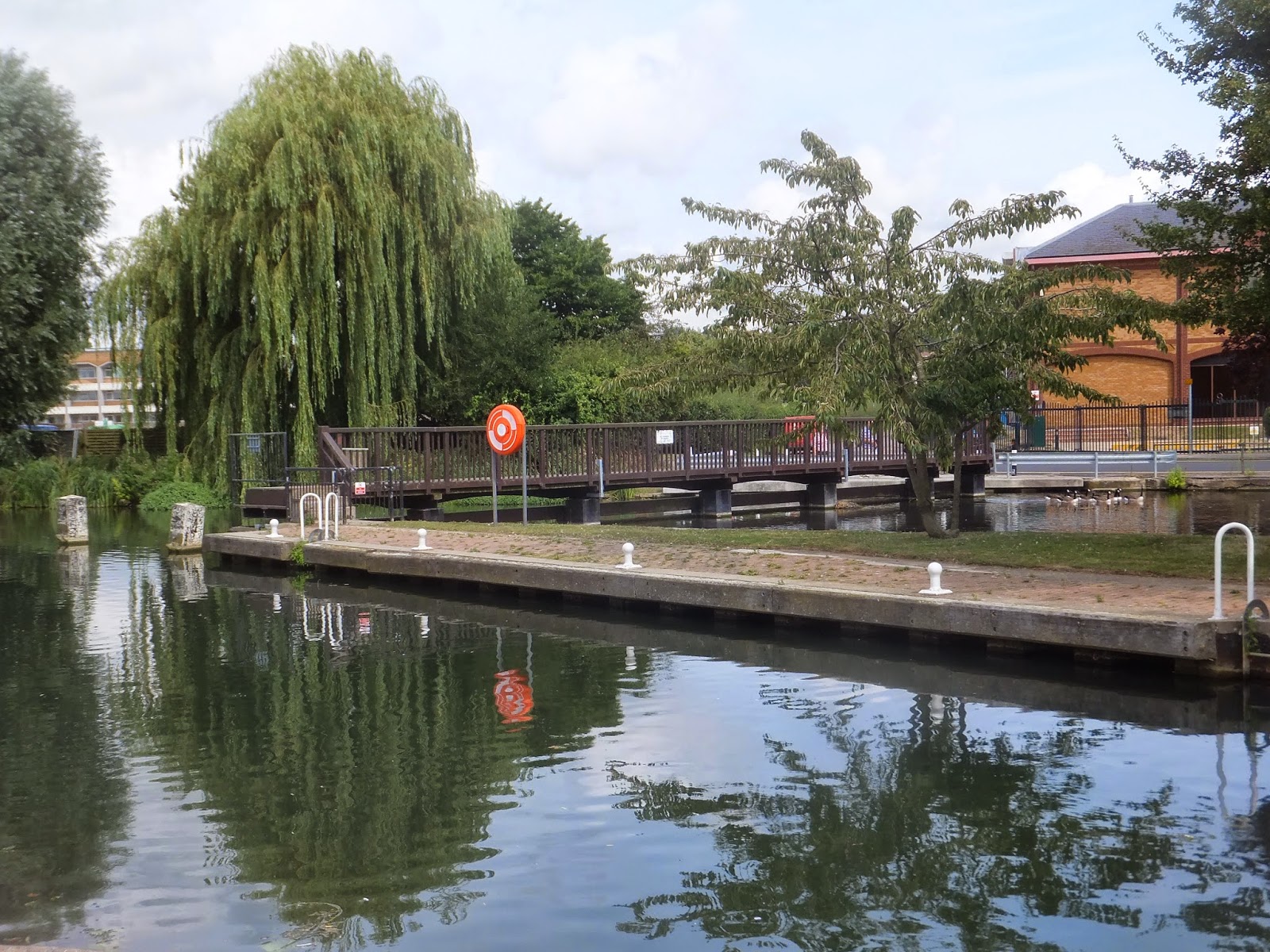 After Ware it was a windy cruise up to Hertford.  I was miles away and almost missed the lock cutting!  I should add that the sign was very small.  One of the paddles on Hertford Lock wasn’t working and apparently had put some people off going to Hertford – it was a bit slow but we canal users are used to paddles not working!

We used the services as at Hertford then went up to the basin to wind and then back down to the visitors moorings – 3 spaces and 14 day ones at that!

Dot has been making as a piece of stained glass to put in the window on Mary H.  I had seen her work in Bristol and thought it would be nice to have one.  Richard has recently sold his sailing boat that he had for 23 years.  Shockwave just wasn’t getting the use as we are always on Mary H consequently the decision was made to sell her so I thought it would be nice to have a memory of her in stained glass.  A lot of tooing and froing of emails and then the finished item when we were on the Basingstoke Canal but it didn’t fit our window so Dot took it back and redid the hooks.  Today she gave it to us and it now hangs in pride of place on one of the windows.  Thank you so much Dot – it is beautiful and a lovely reminder of Shockwave. 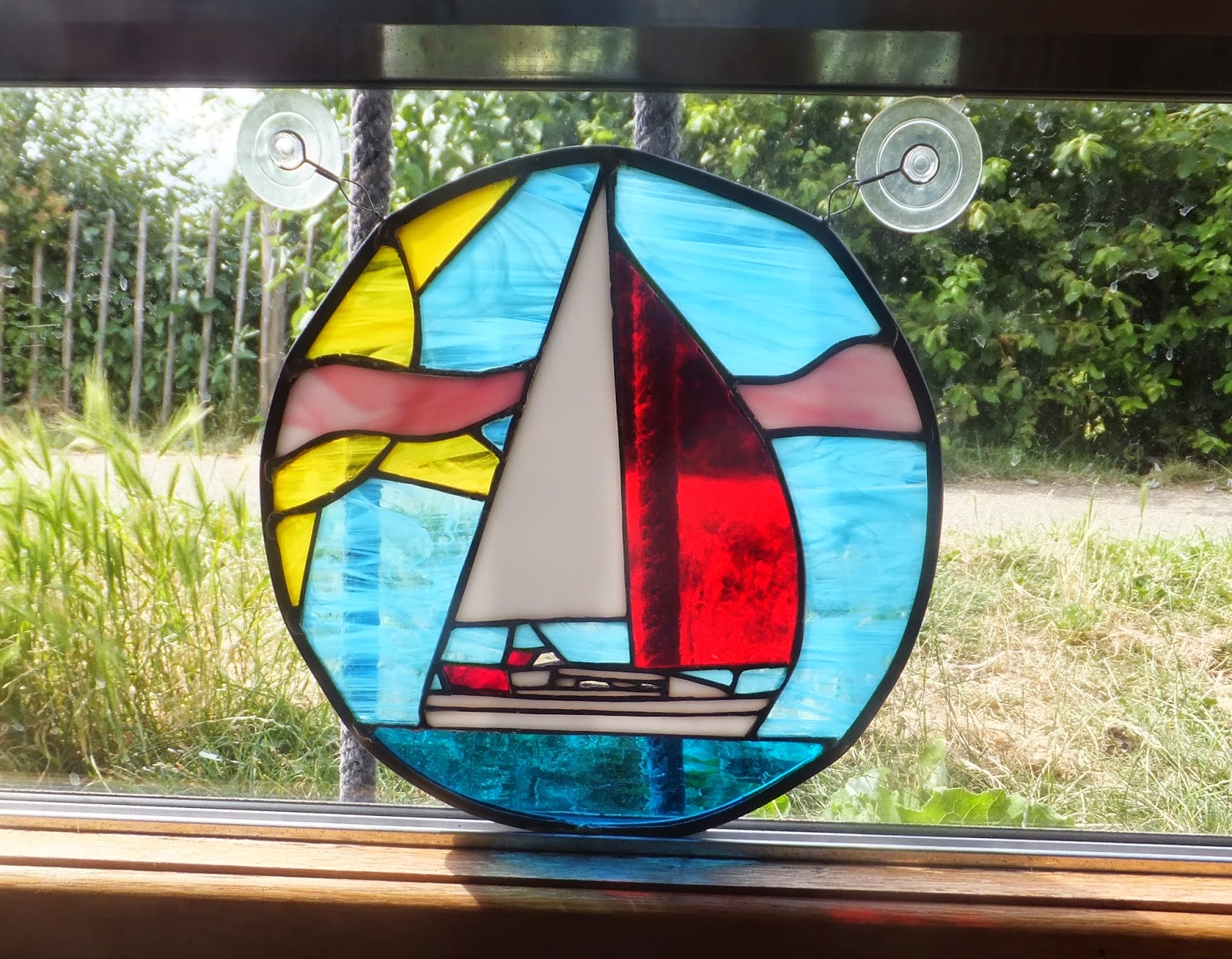 We joined Dot and Gordon for “early doors”.  This seems to be something that a crowd of moorers at Aston Marina got into the habit of doing during the winter.  I read lot of blogs, including many from the Aston crowd so knew about this so I felt very honoured to be invited to an “early doors”!!!  Oh I guess I should say what “early doors” is!  It’s going to the pub around 4pm for a drink and then, supposedly, going back to the boat for dinner.  Wikipedia says “a slang phrase meaning those who arrive earlier than is customary, and was often associated with pub customers who wait for or arrive soon after evening opening, around 5:30 pm.”  We went to the Old Barge and managed 4 rounds – I’m sure that is not the idea! 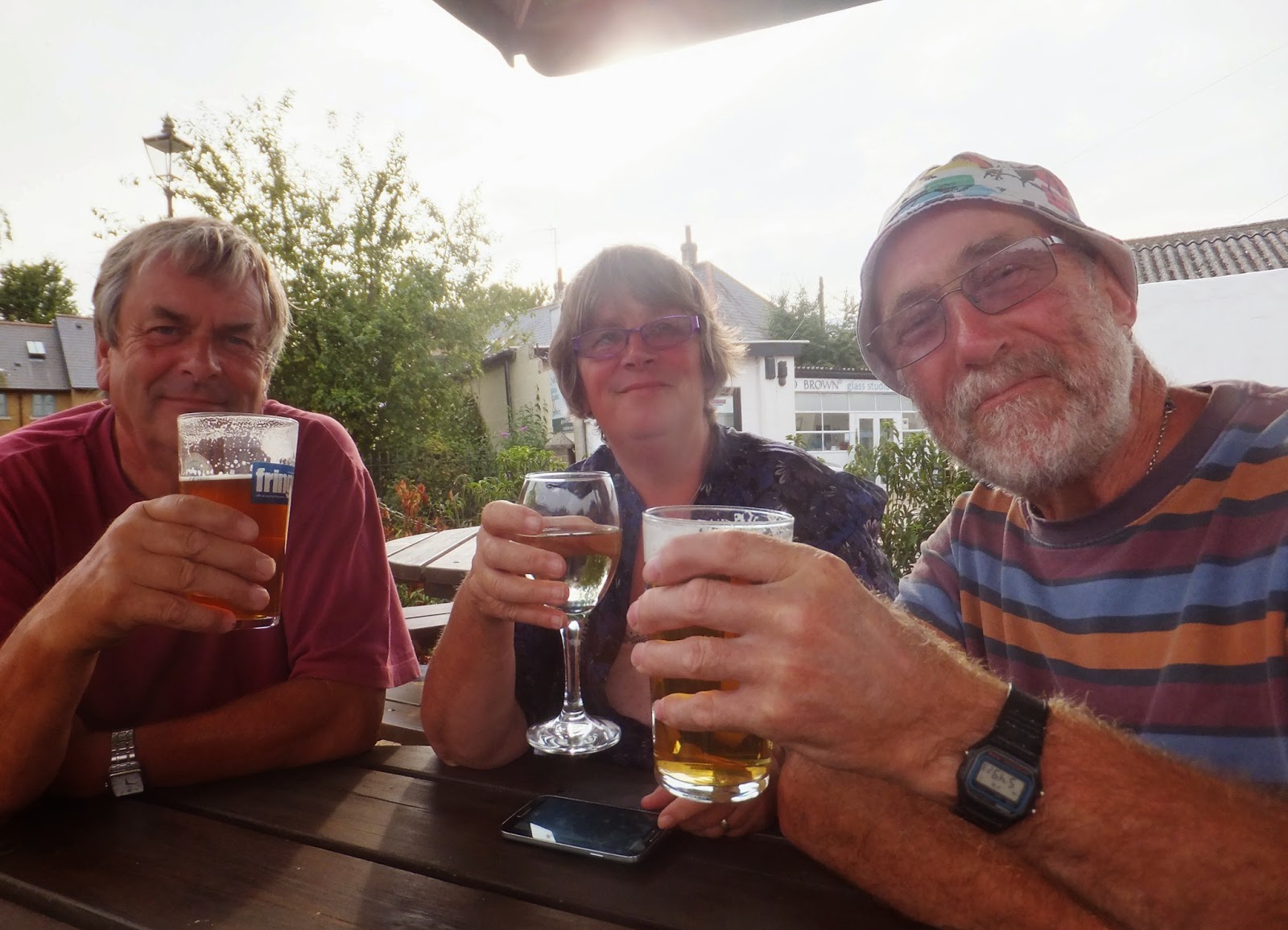 It was then back to Ewn ha Cul where we sat on the bank and Dot cooked dinner – and very nice it was too.  It got chilly around 9.30pm and I had to wear a cardigan – the first time for weeks.  A lovely evening :-)